Tommy Fury: Paul was lucky it wasn’t me in there! 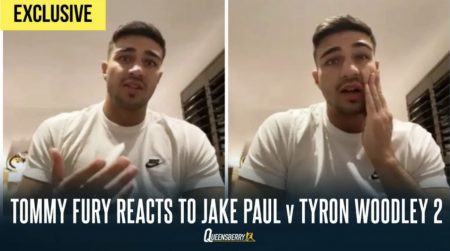 Tommy Fury has thrown down the gauntlet to Jake Paul and challenged him to reschedule their planned encounter for next time out in early 2022.

Fury, who was forced out of his clash with the American after suffering a chest infection and fractured rib, admitted he was a forlorn figure watching his rival take on and beat his previous opponent, former MMA star Tyron Woodley, in a rematch in the early hours of Sunday morning in Florida.

Paul, now 5-0 as a pro, flattened the former UFC welterweight champion in the sixth round with a spectacular single punch KO.

Watching back at home was Fury, wondering what might have been had he been in the opposite corner as the first boxer to oppose the YouTube phenomenon.

“I’m not good, to be honest with you and I have not gone on social media since I posted the video explaining why the fight was off,” Fury exclusively told Dev Sahni on The Unibet Lowdown. “I have probably been at the lowest point I have been in in my entire life. I have never felt or experienced anything so low.

“Imagine having everything you ever dreamt of and then having it ripped away from you through no fault of your own. It is a bitter pill to swallow.

“The chest is one thing, but having a rib break too and even now I don’t think I have really swallowed that pill and I don’t think I will because it was such a massive, easy night for me.”

Despite the brutal finish to the fight, the 7-0 Fury was resoundingly unimpressed by what he witnessed and insists it is now time for Paul to cease calling out and fighting opponents with a non-boxing pedigree.

“I think it shows what sort of place you are in when the commentator says ‘this is pretty hard to watch now’ and the joking between the commentators asking ‘who won that round? Well, nobody.” That went on for well more than half the fight.

“It was very upsetting for me to sit there and watch it. I know, if I had been in there, it wouldn’t have been going six, seven rounds or whatever it was. For the first four or five rounds the guy didn’t throw a punch, they were just wrestling each other.

“So for me to sit there and watch that… It was meant to be my night, my time. That should have been me in Tampa Bay, Florida in front of thousands of people and it will be me. I do believe my time will come, me and Frank are trying to figure out the next date for ourselves to get that fight rescheduled because that is the fight I want next.

“I think he is very lucky that it wasn’t me in there instead of Tyron Woodley. I am trying to give him a bit more credit, but I just can’t. People who come out and don’t do anything against me get put to sleep.”