Tommy Fury Thinks Daniel Dubois Will Be Back Stronger 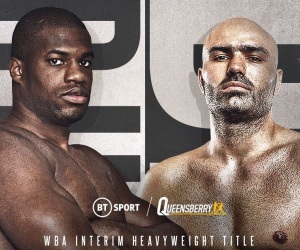 Tommy Fury has leapt to the defence of Queensberry stablemate Daniel Dubois and backed him to bounce ‘back stronger’ from his injury setback.

Dubois suffered his only career defeat against Joe Joyce in ten rounds last November when he took a knee having suffered a broken eye socket.

He has now been cleared to fight by doctors and Dubois (15-1, 14KOs) headlines on Saturday June 5 when he challenges Romanian Bogdan Dinu (20-2, 16 KOs) for the vacant WBA interim Heavyweight title, live on BT Sport.

Fury, 22, is in action on the same bill and told host Dev Sahni on Queensberry’s The Lowdown: “I wasn’t in Daniel’s position. I’m not in that fight. You can only answer those things when you’ve been in that position yourself.

“I’m not gonna sit here after five professional fights, all four rounders saying what I would do in that scenario with a broken eye socket.

“I’d like to think I know what I’d do, but when you’re in that scenario it is a different story.

“Health is before wealth and I think Billy Joe Saunders did the right thing and lives to fight another day.

“I think Daniel is going to come back stronger with a knockout and back in the mix for some great fights. He just needs to keep building.

“It is so good to be on the undercard of such a good main event. It is a privilege to be on the card. I’m just looking forward to showing my skills on the night and what I’ve been learning.”

Fury (5-0, 4KOs) is wrapping up training for his contest next month with older brother Tyson Fury in Miami.

If that happens, young Tommy fancies making it a family double on the undercard by meeting Wilder’s brother Marsellos.

He added: “That fight would make headlines. It would be a privilege to fight on Tyson’s undercard and both of us getting victories.

“I am up for that fight. I am up for anything. I am over here training, in shape so whatever comes I will be ready for.

“I’ll have a piece of him. I called him out before and he never replied.”