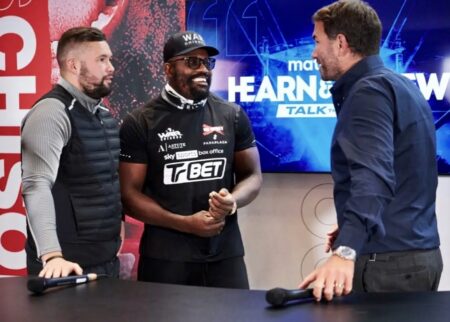 As Eddie Hearn has declared that the Fury vs. Joshua fight won’t happen in December, BestofBets.com spoke to former WBC cruiserweight Champion Tony Bellew about why this fight was doomed from the very start.

What do you make out of all these deadlines Fury introduced and do you believe this is the end of the road for the Fury v AJ December bout?

Tony Bellew: “To be honest…the writing has been on the wall for a while as it was pretty clear from the start that Fury didn’t really want this fight to happen; and I don’t think he thought that AJ would agree to all the terms and dates put in front of him. But he did. So that last minute deadline Fury introduced last week, felt like a final way for Fury to stop the fight from happening – and the only way to prevent if from taking place seeing that both promoters were keen for it to take place; up until now.

“Furthermore, the fact that it’s October already and a fight like this needs a lot more than a couple of months build up – in fact, much more!

“Something of this magnitude needs to be built up slowly and gradually, giving boxing fans a proper insight in the run up to the fight – from press conferences to behind-the-schemes footage in training camps and other stories. And even though we know a lot about these two fighters already, it does need a big, big build up. And it’s impossible to get that done between now and then.

“These two fighters are the legends of our country, the heavyweight division of this era, so it will be great to see it built to a place in the right kind of stadium; and that can’t be rushed.

“Joshua was ready to go ahead – he has all to prove and nothing to lose so there’s little point for him to back down. Furthermore, fitness wise, AJ is a machine. He doesn’t need any warm up fights, he’s good to do whenever; he’s always in shape and he always wants the next best and biggest possible challenge.

“And when the next biggest possible challenge is Tyson Fury, he’s not going to shy away from that. But for some reason, Fury never truly wanted this fight; so whether it was a way to create headlines or something else, I don’t know. But it was always a bit strange that Fury went for AJ, seeing that apart from his popularity, AJ hasn’t got anything that Fury wants – if anything it’s the other way around. So this was purely about money and a big pay check.

“But the fact that Fury was making a big song and dance about AJ purposely delaying signing the contract was questionable seeing that AJ has agreed to every single part of it; yes verbally, but everyone knows, including Fury, that AJ and his team wouldn’t go back on that…and for Fury, that’s a dangerous game to play and it’s not the first time Fury puts Joshua and his camp in this situation. And now, as it turns out, Fury’s team isn’t replying to AJ’s camp, although they have come back on everything that was asked for them…so it’s the same pattern all over again.

“I think they thought AJ would be intimidated when called out by Fury as they didn’t expect him to be up for it – especially after his defeat to Usyk. AJ basically called Fury’s bluff.

“To be honest, I doubt this fight will ever happen – not this year, not next and nor the year after that”.

When the announcement of the negotiations for Fury and Joshua were made, fairly soon after, Usyk’s called out Wilder essentially. Do you think that he’s trying to dodge Fury? Is he looking for an easy opponent? Does he want to hold the title for longer?

Tony: “Fury is the greatest heavyweight of his generation right now. However, for him to really truly define an era and a generation, he has to defeat Oleksandr Usyk. And considering Usyk is just a middleweight, I don’t see a problem really. But for some reason, Fury is worried, which is why he’s not taking the fight and instead, at that point he opted for AJ, which is a strange move.

“But anyone he beats next, whether it’s Charr or AJ or anyone else, he has to beat Usyk so technically, any other fight is pointless and would simply be a cash grab. And if it’s all about cash, the wisest move would to have gone ahead with the AJ fight.