Tony Bellew on What Dillian Whyte Must Do in Povetkin Rematch 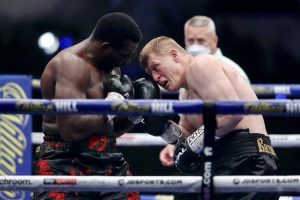 With Dillian Whyte exercising the rematch clause that was in place with the Alexander Povetkin fight (Whyte was knocked out after having Povetkin down twice and was way ahead on points), Tony Belew has put himself into position to offer some advice to Whyte with what he has to do:

“I think there’s adjustments that need to be made on his part and I’ll speak to him. He definitely needs to make changes and there’s just a few other little things he needs to learn. But I definitely believe Dillian Whyte will still get to the final destination and become a heavyweight champion of the world,” Bellew told Talk Sport.

“Just the right opponents at the right time. We’ve gotta remember, 1,000 days he’s been waiting to challenge for the WBC world title. And for 800 of them days Deontay Wilder’s been the world champion – a man who didn’t want to face Dillian Whyte, didn’t wanna know. He was facing taxi drivers instead of facing Dillian Whyte.

“It’s wrong what’s been done to the lad, but he’s now in this very strange position where he’s gotta go into the rematch and his career is on the line. I believe Dillian will beat Povetkin. I think he needs to go in there and perform basically the same. Just, when you go in for the final finish, you’ve got to be alert and aware.”