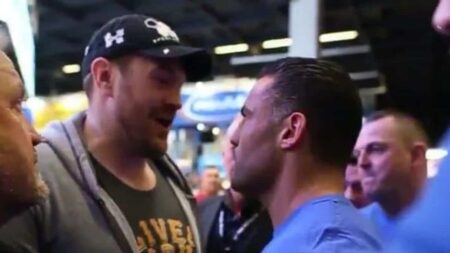 Negotiations have collapsed for a potential clash between Fury and Anthony Joshua, with both sides confirming that a deal will not be reached for the pair to clash in Cardiff.

Fury had set multiple deadlines over social media urging Joshua to sign the contract to face him, however former cruiserweight world champion, Bellew says there was not enough time for the fight to be negotiated properly.

Fury has been going back-and-forth with Charr, who says he has signed an agreement to face the WBC heavyweight champion.

Fans have been critical over a potential meeting with Charr not even ranked in the top 15 by the WBC and Bellew has questioned why this fight is even being touted.

“Are you surprised about it not going down well?” Bellew added.

“Supposedly the lineal heavyweight champion of the world facing a guy who’s not even in the top 20.

“If AJ comes out and says he’s fighting Manuel Charr next coming off the back of two losses, would you be happy?

“Why is the lineal heavyweight champion who’s defeated Deontay Wilder in three fights back-to-back, we all know the first fight wasn’t a draw, why is he being allowed to face Manuel Charr?

Eubank Jr. vs. Benn CANCELLED – BBBofC will NOT sanction Brandon Jones wants to make it six of the best this Friday