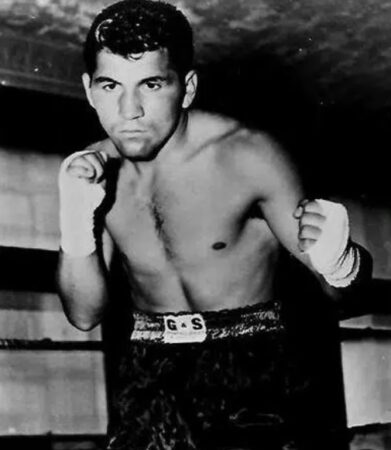 The International Boxing Hall of Fame announced its flags will fly at half-staff in memory of welterweight champion Tony DeMarco, who passed away today in Boston. He was 89.

“Tony DeMarco was one of the standout stars of the Golden 50s and provided so many thrilling moments during his legendary career,” said Hall of Fame Executive Director Edward Brophy. “The Hall of Fame offers our condolences to his family and joins the boxing world in mourning his passing.”

The fighting pride of Boston, MA, DeMarco turned pro in 1948 at the age of 16 and beat many top lightweights and welterweights of the era including Paddy DeMarco, Teddy “Red Top” Davis, Chris Christensen and Pat Manzi before stopping Johnny Saxton (TKO 14) to become welterweight king in 1955. His two 1955 bouts with Canastota’s Carmen Basilio are among the greatest in 147-pound history and their second battle earned “Fight of the Year” honors. DeMarco retired in 1962 with a record of 58-12-1 (33 KOs) that includes wins over Kid Gavilan, Wallace “Bud” Smith, Vince Martinez, Gaspar Ortega and Don Jordan among others.

In 2019, DeMarco was elected into the International Boxing Hall of Fame.