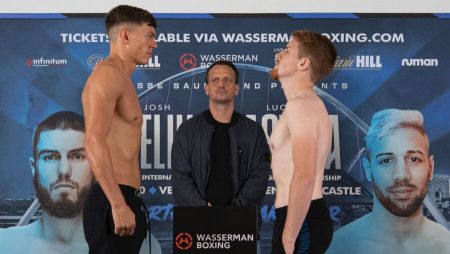 Olympic medalist Tony Jeffries wants Pat McCormack to be given time to “learn his craft” as he transitions from world class amateur into title-chasing professional.

Sunderland hero Jeffries returned home from the 2008 Beijing Olympics with a bronze medal before turning professional the following year.

McCormack, who hails from the same area of the north east of England, won a silver medal at the 2020 Tokyo Games and fights for the second time as a pro, tomorrow night in Newcastle.

Jeffries says boxing fans in that part of the world will throw their unflinching support behind McCormack but the 27-year-old needs to pick up as much experience as possible before being ready for world titles.

“Pat is a very talented fighter and I have been very impressed with him,” Jeffries told Probellum.com.

“About five years ago, I was doing a speaking event back in Sunderland, and people were talking to me about Pat and, his brother Luke, back then.  This was before the Olympics and so there has been a buzz around the McCormacks for a long time.

“I think fighters are being fast-tracked too much these days.  I think Pat needs to try and build up that experience, as well a building up his name and brand before he is put in world title fights.  Josh Kelly could’ve been a superstar, but he was rushed.  I am a big believer in allowing fighters to learn their craft because even though Pat was a world class amateur, the pro game is a bit different.

“Floyd Mayweather was an Olympic medalist too, but he took his time to build up his experience.”

Hand injuries forced Jeffries to retire after only 10 pro fights but felt that during his short-lived stint in the paid ranks, he did all he could to maximise his profile – and has urged McCormack to do the same.

“What I was good at, that a lot of fighters aren’t, was putting myself out there,” he said.

“If Pat can put himself out there, get publicity, get on social media and really build his brand, other than through his boxing, then he will gain so much more support.”

He added: “I found that the pressure I felt during my career was the pressure I put on myself.  The people of the North East will always back you, they were very supportive of me, even when things didn’t go right.”