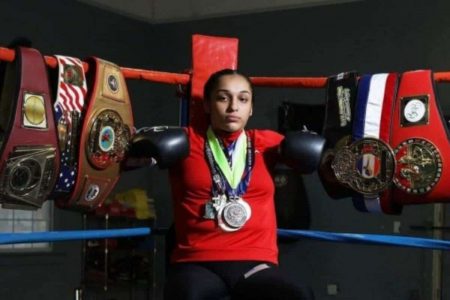 The card will air live on Fite TV, beginning at 7:00pm PT.

“What a thrill as a fight promoter to have both Jesikah Guerra and Seta Vatuvei make their pro debuts on one of my shows,” said Hall of Fame promoter Roy Englebrecht. “They will follow in the footsteps of Christy Martin, Layla McCarter, Kelsey Jeffries, Mia St. John, Kina Malpartida, Rhonda Luna, Crystal Morales, and many more female boxers who have fought for me over the past 25 years. With this fight at 154 pounds and Jesikah’s great amateur career, you can bet Katie Taylor, Amanda Serrano, Jessica McCaskill, and my fellow promoter Eddie Hearn will be buying the Fite.tv broadcast to check Jesikah out.”

One of the most dominant amateurs of this era, 19-year-old Jesikah Guerra has made her country and her hometown of Victorville, California proud with her talent and a laundry list of accomplishments for Team USA. A recent winner of a gold medal in the Pan Am Games, Guerra was a strong candidate for the 2024 U.S. Olympic team but has decided she wants to chase championship gold in the pro ranks, and that quest begins on August 25.

“I am super excited to be making my pro debut at Fight Club OC, one of the hottest shows in Southern California,” said Guerra. “I have waited for this moment my whole life and it has finally become a reality.”

A respected amateur in her own right, Hayward, California’s Seta Vatuvei wasn’t planning on making her pro debut this August, but when the 31-year-old was presented with the opportunity to compete in one of the summer’s biggest bouts against Guerra, it was an offer she couldn’t refuse, and she can’t wait for her moment to shine.

“There’s a reason she’s achieved what she has in the amateurs, and I’ve been training really hard to dominate and win,” said Vatuvei. “The fans should expect to see a great performance from an aggressive fighter. I’m grateful for this opportunity and will make the most of it.”

Tickets, priced at $60, are available at www.socafights.com.

Sam Daly looking to build upon his winning debut this Friday Gary Antuanne Russell: Training camp quotes ahead of July 30