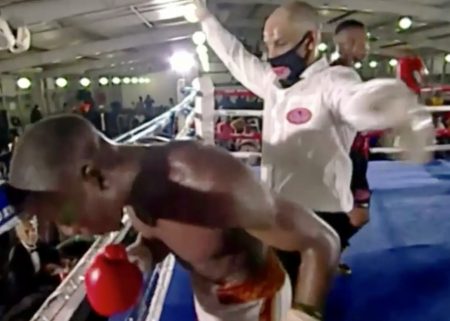 (Video at bottom of article)

Below is a statement from the WBF regarding the tragic fight held in Durban, South Africa, between Simiso Buthelezi and Siphesihle Mntungwa:

Two young, talented fighters with the world at their feet, Siphesihle Mntungwa (6-1) and the huge prospect Simiso Buthelezi (4-0) thrilled the large crowd with 9 exciting rounds of boxing with Buthelezi one round away from winning the title, albeit in a close fight.

Then the bizarre happened with twenty seconds left in the final round. Buthelezi inexplicably turned away from his opponent, walked strangely towards his corner and started to throw wild combinations at an invisible foe. Clearly something was not right.

Referee Elroy Marshall responded brilliantly by immediately halting the fight in favor of Mntungwa. Buthelezi then began to have convulsions, and immediately the doctors, medics and other staff were in the ring administering medical assistance.

President Howard Goldberg advised the announcer that while Mntungwa was the official winner, that no belt awarding ceremony would take place given the sensitivity of the situation. Mntungwa was later given the belt in the dressing room and advised as such.

Buthelezi was rushed in an ambulance to the King Edward Hospital’s neurological ward. It was later found that he had a bleed on the brain, and was placed in an induced coma, and he remains in a critical condition.

Buthelezi remains in our prayers and thoughts and we hope that he will make a healthy recovery over what will be a difficult few weeks ahead.

What transpired affected many people at the event, many of whom were in tears. Elroy Marshall did a superb job, as did the entire team of doctors and medics who were present. Promoter Zandile Malinga did everything one hundred percent correctly with regards to medical protocols and procedures for the event.

Boxing is a tough and brutal sport. It is in our blood and we live for the sport. Sadly these things happen and no-one knows why.

The young, well educated Buthelezi made weight at the first attempt, passed all his medicals without any issues and took very little punishment in the fight.

We will continue to monitor Simiso’s condition and he is in our thoughts and prayers.”

Since being placed into an induced coma, sadly he has passed away.

In a statement, co-signed by the boxer’s family reads: “It is with great sadness for Boxing South Africa and the Buthelezi family to announce the passing away of Mr. Simiso Buthelezi who passed away last night June 7 2022 at hospital in Durban.

“On June 5 2022, Mr Buthelezi participated in a boxing tournament hosted by Starline Boxing Promotions at Greyville, Durban. Towards the end of his bout, Mr Buthelezi collapsed and was taken to hospital and it was discovered at the hospital that he suffered a brain injury which resulted in internal bleeding.

“At the hospital Mr. Buthelezi was given the best care possible but he however succumbed to the injury last night as aforesaid. Boxing South Africa will conduct an independent medical review of the injury and will then make public the results of that medical review.

“Boxing South Africa and the Buthelezi family wishes to request members of the public and the media to give them space while mourning the passing away of this great boxer who was exemplary both outside and inside the ring.”

May he rest in peace.