Trainer of The “Chocolatito” Confident of Rematch Triumph 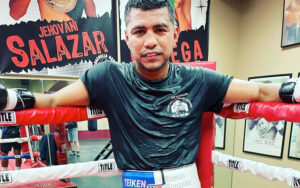 “One of the things we are working on is long combinations. He threw more than 1000 blows in the previous fight, but now he`s punching with greater power,” commented Marcos in an interview with“ Viva Nicaragua,” also stating:

“We started the camp strong and motivated, because we are going to war with Estrada, who`s a demanding fighter. That`s why we must reach the highest competitive level.”

According to Marcos Caballero, Roman runs for forty five minutes in the morning. In the afternoons he works on the strategy that he will bring to the contest, and eight demanding rounds of sparring.
“We know the quality of the rival, but we trust that in the ring, the one who arrives better prepared and with the best strategy, will win. That will be us!”

Nine years later… they will meet for the second time on March 13, 2021 at the American Airlines Center in Dallas, Texas, for the WBC and WBA super flyweight belts.