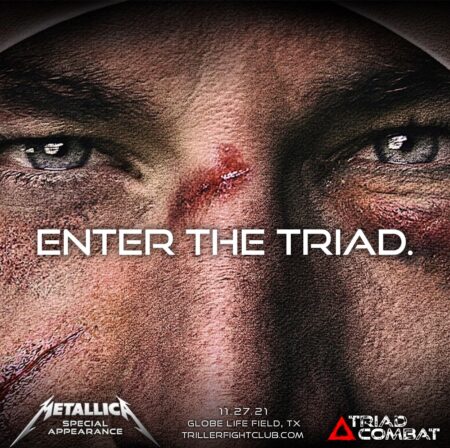 METALLICA and TRILLER, the parent company of VERZUZ, FITE TV and TRIAD, today announced Tickets are Now On-Sale for TRIAD COMBAT which includes a full METALLICA concert during and after on November 27, 2021 at Globe Life Field in Arlington, TX.  Doors open at 7:00 p.m. local time with the event starting at 8:00 p.m. local time.

Prior to the Concert Is the Highly Anticipated Debut of TRIAD COMBAT.

TRILLER FIGHT CLUB is celebrating the one-year anniversary of its extraordinary launch on November 28, 2020 which shook up the sports and entertainment world as Boxing Legends MIKE TYSON and ROY JONES battled in Los Angeles, CA on a Pay-Per-View broadcast which garnered 1,600,000 PPV buys.

In the past year, TRILLER FIGHT CLUB has sold over 3,000,000 Pay-Per-Views making it one of the top selling combat sports / entertainment platforms. The widely acclaimed monthly TRILLERVERZ series including world class professional boxing and extraordinary VERZUZ battles has consistently been at the top of watched broadcasts averaging over 5,000,000 views. The Trillerverz events have been the most watched sporting events of the year far exceeding even the UFC’s viewership on each of its events.

The show will be produced by the award-winning NIGEL LYTHGOE, the TRILLER FIGHT CLUB visionary in addition to the producer and creative force behind American Idol and So You Think You Can Dance.

*The Metallica concert post fight will not be on PPV but exclusively on FITE.TV and Triller.*

The Triad Combat PPV event will be carried in North America across all PPV platforms, including cable, satellite, telco, and streaming.