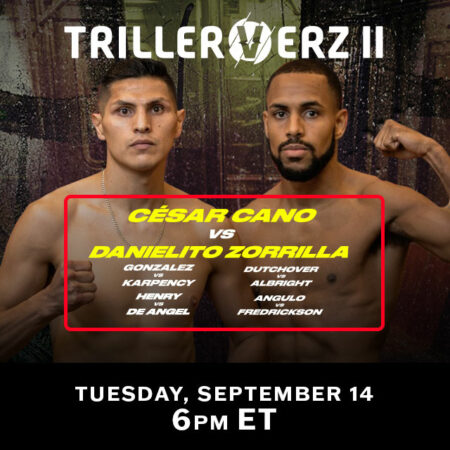 Hip Hop fans and Boxing fans were the huge winners this past Tuesday night, September 14 as TRILLERVERZ II delivered record-breaking numbers of viewership once again. With an outstanding five-fight boxing card from the Hard Rock LIVE at the Seminole Hard Rock Hotel and Casino followed by a star-studded, celebrity filled Verzuz Battle between FAT JOE and JA RULE from the Hulu Theater at Madison Square Garden, TRILLERVERZ truly delivered once again in an unprecedented way.

With total viewership still being tabulated, TRILLERVERZ II will exceed the 5,000,000 broadcast views from its debut on August 3 which featured the first LIVE Verzuz Battle between THE LOX and DIPSET.

Said the Former Heavyweight Champion of the World, SHANNON ‘THE CANNON’ BRIGGS’, “This was my first Triller Fight Club boxing event and I was blown away by the quality of the fights and the intensity of the production. It’s no wonder all the old-time boxing promoters have it out for them. They are shaking up boxing, Let’s GO Champ.”

The entire TRILLERVERZ event can be replayed at FITE.TV and www.TrillerFightClub.com. Details on the next TRILLERVERZ will be announced shortly!

TRILLER FIGHT CLUB returns to the Hulu Theater at Madison Square Garden on October 4, 2021 with an extraordinary boxing card headlined by the highly anticipated UNDISPUTED Lightweight World Championship between Champion, ‘THE TAKEOVER’ TEOFIMO LOPEZ and Mandatory Challenger ‘FEROCIOUS’ GEORGE KAMBOSOS. Tickets starting at $56 can be purchased at www.TrillerFightClub.com. The event will be broadcast live on Pay-Per-View priced at $49.99 available globally through FITE.TV  and on traditional cable/satellite via iNDemand.