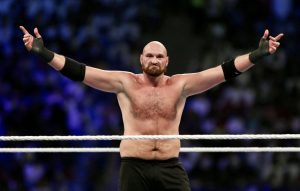 Paul “Triple H” Levesque (WWE executive) is hoping for the crossover bout to happen between the WBC heavyweight (boxing) champion Tyson Fury and WWE champion Drew McIntyre. Over the week, both have had plenty to say but it seems though it has gone a stage further.

Fury made his WWE debut (with a few more to come I’m sure) in October 2019  when he defeated Braun Strowman in Saudi Arabia.

“We could make Drew McIntyre vs. Tyson Fury work out, Tyson has got my number – we will make a call”  Tripple H told the PA news agency.

“Tyson Fury is one of those fighters that sometimes now finds himself in a position where, does Anthony Joshua want to fight him? Does Deontay Wilder want the rematch? Because he has proven to be maybe next-level from everybody.

“If you are able to make a super-fight, a mega-fight like a WWE champion Drew McIntyre, like a world champion in Tyson Fury in boxing, I think we sell out massive stadiums, do record global box office business and that is what is all about – so my phone is on.

“When someone like Tyson Fury comes in, he brings a sport aspect to this, he brings a boxing world championship and a popularity in something totally different that helps eyeballs across the board. We gave him a platform to be the entertainer that he was born to be, sometimes he has that in boxing but the platform at that level for the entertainment pieces isn’t as big. It is a win-win for both, Tyson is one of the most professional people I have ever worked with across the board – I spent a lot of time with him a few years ago and I would love to have him back.”

I’m sure he would.

I know it’s all a little bit of ‘fun’ but it’s maybe a good idea focusing on his boxing career. The third installment of Fury vs Wilder is not an easy task. With Wilder, he just has to lose concentration for that split moment and…