Troy Williamson: I Deserve The Next Shot at The British Title 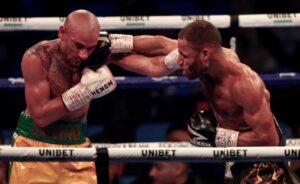 Troy Williamson believes that everybody else needs to get in line for the British super-welterweight title – insisting that he will be next for the title if he defeats Kieran Smith on Friday.

A superb clash of unbeaten super-welterweights sees Williamson (15-0-1, 11 KOs) take on Smith (16-0, 7 KOs) in London this week, on the undercard of the IBF flyweight title fight between Moruti Mthalane and Sunny Edwards.

Anthony Fowler has set his sights on Ted Cheeseman’s British title, but Williamson has now responded to Fowler, and made it clear that a win over Smith puts him in the driving seat.

Williamson said: “I have seen all of Fowler’s comments, but it all goes over my head. I’m just interested in getting the win on Friday and pushing on.

“You have to say Ted is number one because he is the British champion, but I am in the top three and when I win on Friday I am number two in my opinion.

“At the minute I am ranked eighth by Boxrec and I should be a little bit higher. I still have a lot to prove and although I haven’t had the opportunities I deserve, they’re now coming. People will see me get the win against Smith and that will put me right up where I deserve to be.

“A lot of people think I just come forward and fight, but I can actually box and you’re going to see that against Kieran. He is an awkward southpaw and I can’t just rush forward.

“I boxed for three or four years all over the world as an amateur, so have a good pedigree, but a lot of people don’t take notice of that.”

Elsewhere on Friday’s event, along with the world title showdown between Mthalane and Edwards, Michael Conlan makes his highly-anticipated return as he goes up against Ionut Baluta.

On This Day: Joe Calzaghe Defeated Mario Veit in 2001 Yulihan Luna vs. Bárbara Martínez in Mexico This Friday