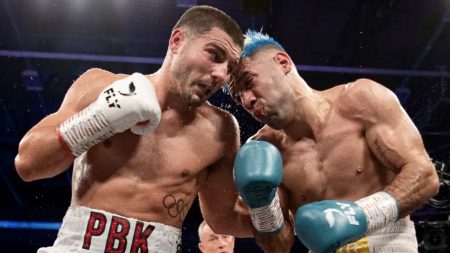 Troy Williamson says Josh Kelly will “not be able to live” with the pace he plans on setting if the pair clash for the British super welterweight title.

Williamson was ringside in Newcastle on Saturday night and was left deeply unimpressed by Kelly’s performance against Lucas Bastida.

‘The Trojan’ gate-crashed Kelly’s post fight interview to remind Kelly that he is ready to put his British crown on the line before the end of the year.

Kelly insists he wants the all-North East clash but Williamson has warned his rival about what lies in store.

“I spent most of the fight on my phone, looking up now and again, because it was the same pattern for 10 rounds,” Williamson told Probellum.com

“I expected better from Josh.  But either way, I’m confident I bet Josh Kelly and beat him in good fashion.

“I’m stronger, fitter and a lot tougher; I would push the pace from round one and I would be surprised if he saw out the 12 rounds with me.  I would make him work at a pace he’s uncomfortable with and one he won’t be able to live with.  He might be tricky for the first four or five rounds but over a 12 round fight, I’ll get to him in the end.”

Sam Jones, Probellum’s Head of Talent Relations, added: “This is a mouth-watering fight.

“Josh has said he wants the fight, Troy wants the fight and it’s a perfect fight for both men.  It’s not only s big fight in the North East but it’s a big fight for British boxing and there is no reason why it doesn’t happen next.

“Kelly would have a six round window to try and get Troy out of there but we are confident of our guy doing the business.”