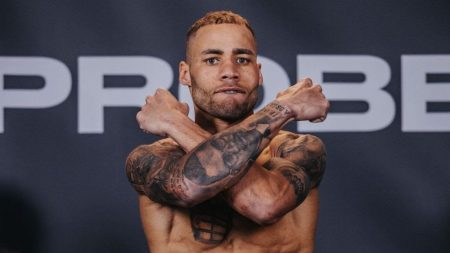 Troy Williamson has told Josh Kelly to agree to a mouth-watering British title showdown instead of chasing “easy” fights.

The British Boxing Board of Control have ordered Williamson to defend his super welterweight crown against Kelly, after James Metcalf pulled out of a fight with the champion.

Bids to promote the fight must be submitted by August 10.

Williamson, from Darlington, and Sunderland’s Kelly could now clash in a “huge” fight for the North East of England and ‘Trojan’ – one of British’s boxing most exciting fighters – hopes his rival doesn’t try and avoid him.

“I’ve known Josh since our amateur days and we are friends outside of the ring, but that will have to be put to one side if we fight.

“He’s got all the talent in the world and a big following, so this would be a huge occasion.  I posted on social media after hearing the news and everybody is already getting excited for this fight.

“I just hope Josh takes the fight and isn’t like all the others who just want easy fights.”

But Williamson has already warned Kelly about what lies in store for him if the fight happens.

“I’m a proven 12 round fighter who is strong at the weight,” said the British champ.

“And as everyone has seen, I get stronger as the fight goes on.  I am a lot stronger and fitter than Josh and that will tell over the distance.”

On Liverpool’s Metcalf pulling out a fight with Williamson, the Probellum man said: “I’m disappointed JJ Metcalf withdrew from our fight.

“He’s said that fighting me for the British title is a backwards step but I don’t blame Eddie Hearn [his promoter] for not wanting to put him in with me, I’ve already stopped his other super welterweight fighter, Ted Cheeseman, and I would have done the same to Metcalf.”