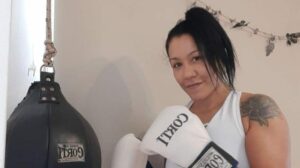 A new opportunity has been confirmed for boxer Erica “La Pantera” Farias, who will fight against the also Argentinean Yanina “Panterita” Lescano. The fight was announced for April 9th in Buenos Aires with the promotional seal of Chino Maidana Promotions, with the World Boxing Association Interim Super Lightweight title at stake.

With great battles under her belt, Erica Farias is known for her powerful punches and a tough style in the ring. She was 135 lbs. world champion with seven successful defenses until 2014, when she lost to Belgian Delfine Persoon. Then she won the 140 lbs. belt and lost it to Jessica McCaskill in 2018 and tried to regain it in an unsuccessful rematch a year later. In addition, La Pantera faced Cecilia Braekhus at 145 lbs.

Farias has an important amateur career in which she has fought for
Pan American and world championships as a member of the national team. However, she has not yet been able to fulfill her Olympic dream, so since 2019 she has decided to compete in Tokyo. At the beginning of 2020, she participated in the Future WBA Champions camp in Colombia, where she had the opportunity to fight in three rounds with some of the outstanding elite amateur fighters.

Farias has a professional record of 26 wins with 10 KOs and 4 losses, while Yanina “Panterita” Lescano has 7 wins and 1 loss. Lescano is South American lightweight champion. And it is worth remembering that American Keli Reis holds the World Boxing Association 140 lbs. regular title.