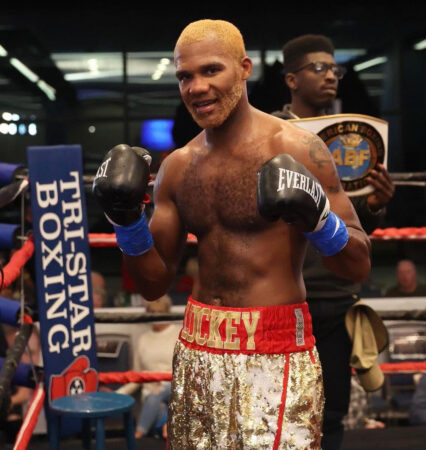 In short two years, after signing a contract with Granite Chin Promotions, veteran New Jersey boxer Tyrone “Hands of Stone” Luckey has gone from journeyman to legitimate opponent with a promising upside.

“Guys like Tyrone have a special spot for me,” Granite Chin Promotions president Chris Traietti commented. “I’ve helped to build up his record, developed trust between us, and we’ll see where we go from here. He’s a big Dallas Cowboy fan and he really wanted to fight in AT & T Arena. He dreamed of fighting there and  I got him on the Spence-Garcia card, and he got the biggest purse of his life

“He is a fighter’s fighter. Any promoter would be very happy to have 25 like him in their stable. His goal now is to make as much as he can over the next few years and get out with his health. He continues to trust me. He wants to be part of the team and I just signed him to a new 3-year deal. Tyrone has had a bit of a rebirth in his career.”

The former New Jersey Golden Gloves Champion had a 9-12-4 pro record, when he joined the Granite Chin stable, and since then Luckey has won six of nine fights, capturing the ABF USA Mid-American super lightweight title along the way.

“I had no choice but to get better,” Lucky spoke about his resurgence the past two years. “It first changed when I started going to Gladiator’s Gym for help with trainer Shawn Darling. My career in boxing changed since the pandemic started.

The 36-year-old Luckey (15-15-4, 11 KOs), fighting out of Galloway (NJ), is a throwback fighter back to the days boxers only asked when and where they were fighting, no pickin’ and choosin’ soft touches. Evidence of his admirable attitude is the fact he’s fought in six different weight classes, from super featherweight to super welterweight, during his 11-year-pro career.

“I’m not afraid of anyone,” Luckey said. “I fight guys others avoid, even some that world champions wouldn’t fight. I’m able to fight in different weight classes because I know my body and how to properly get done in weight. Right now, I feel comfortable at 140 pounds, and I feel like I have a ton of power at 130 or 135 pounds. I’m naturally small, but psychologically, I’m always the bigger fighter no matter what position I find myself in.”

Luckey’s stock jumped in his last two fights, both against previously unbeaten Eduardo Aguilar, who was knocked out, respectively, in the first round and he couldn’t continue past the sixth round in their most recent fight, in which Luckey dropped Aguilar seven times.

A married man who is and endoscopy technician, Luckey has been saving his boxing purses to eventually buy a house.

Luckey and Traietti, also a pro boxer, have a mutually beneficial relationship today. “Our relationship has always been great,” Tyrone confirmed. “I had a fight fallout and the matchmaker set me up with Chris, who was working a fight in Minnesota. He said that after the fight we could talk. He’s a good dude, great promoter. I’m glad our paths crossed because he’s put me in a new situation. I put my faith in him. It’s always love when we talk.”

“We hit it off right away,” Traietti concluded. “He’s easy to work with and will fight anybody. To his credit, he signed with me when it wasn’t really popular, not until 8 to 10 months later. Granite Chin has blown up and my some of my fighters have been performing on some of the biggest cards in boxing.”

Do you feel lucky? Tyrone Luckey certainly does and he’s finally cashing in on all his hard work and perseverance, fighting under the Granite Chin banner.