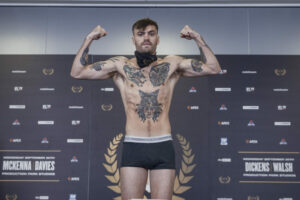 Tyrone McKenna feels Zhankosh Turarov lacks the experience required to defeat him ahead of the highly-anticipated showdown between the two men next month.

It is part of a series of events held by D4G Promotions in association with Round 10 Boxing and MTK Global, and sponsored by Everlast and Sports Direct.

McKenna is back in action following his Golden Contract final with Ohara Davies, while Turarov returns for the first time since July 2019, something that McKenna feels will work in his favour.

McKenna told IFL TV: “It’s exactly what I like, which is tough, hard fights. He was supposed to be in the Golden Contract at one stage, so I watched a lot of him.

“I know exactly what he’s like. He’s a dangerous fighter and he hits hard, but there are a lot of things I see that he lacks, and I think I can exploit that.

“He’s undefeated in 24 fights, while I’ve had 21 wins and two losses, but I’m still ranked higher than him. It shows that I’m higher than the calibre of people that he’s been fighting.

“I have the experience of being in with higher level of opponents, and that will be a factor. He’s been inactive too and that could also play a part. I’m going into this very confident.

“On paper his record looks good, but I’ve been in with hard hitters before and that doesn’t faze me. Records mean nothing when you’re in the ring.”