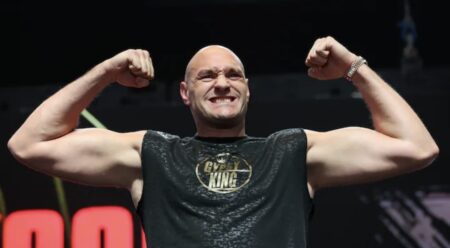 Tyson Fury feels Deontay Wilder’s constant cheating claims is making him delusional – and the Gypsy King has vowed to smash his opponent’s face in this weekend.

The Gypsy King says the excuses Wilder is making is so the Bronze Bomber can try and convince himself of a victory this weekend, but Fury says there is no chance of that happening.

Fury told The MMA Hour: “We’ve boxed 19 rounds and he’s practically won two rounds out of 19. With Wilder, in my opinion, he’s come out with all this stuff saying I’ve cheated. Whether he believes it or not is another thing, but he has to try and sell the fight somehow.

“He has to try and make a reason why he could win. So he clearly couldn’t do the reasons why in a boxing fight so he has to make other reasons for his own self, for the people around him who are saying he can do this, he can do that.

“If he went into this fight saying, ‘You know what? I got absolutely annihilated the second time, it’s probably going to happen to me again,’ then his mental attitude would definitely be of a loss straight away. But if he’s convinced himself that there’s been some skullduggery going on, maybe he thinks in his own mind he has got a better chance or something.