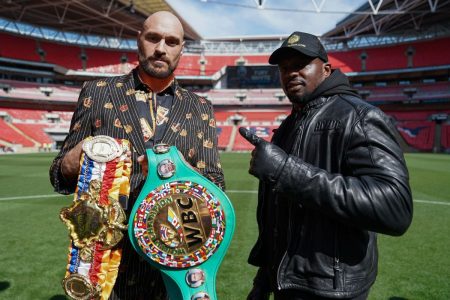 The pair met the media at the final press conference in a packed Wembley auditorium, where there was standing room only, for the two fighters having their say before punches are traded underneath the giant arch on Saturday.

Below are a selection of key quotes from today’s media event.

“This is a European record for a fight with 94,000 tickets sold. It will be a fantastic night, no doubt about that, you’ve got the best heavyweight of his generation and WBC champion against a young man over there in Dillian who has been waiting for his shot. He has got the fight and we know he is in great shape and condition, we have looked at some of the footage and seen how hard he has trained.

“But he has got to train hard when you are fighting a guy like Tyson Fury because Tyson has trained hard and we’ve had quite a few conversations over the last few weeks and he said to me that it is the best training camp he has ever, ever had. That is testament to SugarHill and all the team for getting him to where he is at.

“You’ve got both of these guys in tip-top fighting condition. So what are you going to get on the night? A great fight.”

“First of all it is a pleasure to be here. This is more than boxing, this is the global epicentre for entertainment and sport and it is a tribute to all of us in the room, a tribute to Frank, BT Sport and two prizefighters who will bring it all after many years working in the gym. The world is going to be watching. It is an honour to be a part of and it is going to be a wonderful night.”

“The fight is here, the big night is just a few days away, Dillian has landed, cameras are here so it is lights, camera, action!

“Training went well and I started working in about January for this fight and had seven weeks together with Sugar. We had a great preparation and there is never any complaints from me, we always do what we can do in training camps and do the best we can do on the night.

“Dillian has had a great training camp as well and he is a good fighting man. The fans are in for a real treat, 94,000 people are going to see a good tear-up. I know Dillian personally, he knows me and we are going to rock ‘n’ roll on the night, throw down and treat you all to a helluva barnstormer, don’t worry about that!

“Working at home has been absolutely fantastic. Big shout out to Top Rank in America who made fights for me possible over there and big shout out to Frank who made all the fights in England happen.

“It has been an amazing journey. From where I started all those years ago to all the ups and downs, being fat as f**k, going through mental health and alcohol problems and all the rest of the stuff that I am not ashamed of – it is part of who I am. To coming back to being top of the world and having three big fights with old Deontay over there and now being back in England after all these years and now I am fighting my old pal Dillian Whyte for all the glory.

“Who would have thought it? We didn’t think we’d be doing 90-odd thousand at Wembley. You’ve got Mr Golden Bol**cks, who got stopped by a middleweight, and that’s it. Where is he now? We’re here, we’re representing and we’re going to put on a good show.

“I am looking forward to an awesome, memorable night. This will break all records in Europe. For a boxing match between two old boys who people wrote off through most of our careers, we ain’t done bad, have we?

“I just want to say a massive thank you to every person who has spent their hard earned money on a ticket or is going to buy the pay-per-view in America or England.”

“I am excited to be here, sorry I couldn’t be here earlier, but I am here now so let’s go.

“Like Tyson said, we never expected to be here, me especially after taking risks time and time again. I’ve had a couple of slip-ups along the way, but I am here and ready to go.

“There was no strategy to not being here before and there are two sides to every story and the sides need to come to an agreement.

“You will see what I do on Saturday night, but I have been working on being adaptable because I will constantly need to adapt and make smart decisions. I will go in there and do my thing.”