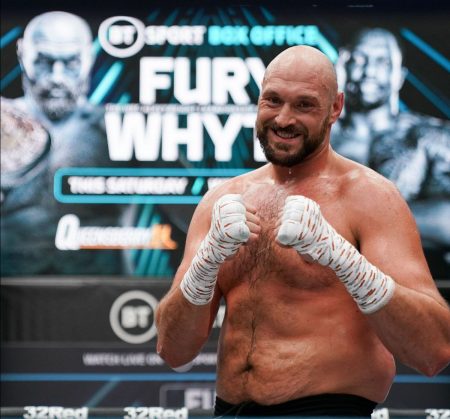 TYSON FURY WAS put through his paces at this afternoon’s open workout event ahead of his WBC World Heavyweight title defence against Dillian Whyte on Saturday, 23 April at Wembley Stadium connected by EE.

Fury, along with most of the undercard fighters, performed in front of the media and public at BoxPark, Wembley in the opening fight week activity before Saturday’s BT Box Office blockbuster.

Keeping it in the family, light heavyweight Tommy Fury was also on parade ahead of his toughest fight against Daniel Bocianski.

Then came the Gypsy King, who promptly pulled former opponent Otto Wallin up into the ring with him.

“My promise is you are going to get an excellent fight,” said Fury following four rounds of work with trainer SugarHill Steward. “Dillian is bringing his A-game and he is going to fight the best Tyson Fury. We are going to give the fans a real treat because you’ve got two top heavyweights in the world who are going to smash each other to bits for the entertainment of the paying customers.

“Do not miss this one! There is going to be a lot of fireworks and a lot of bombs getting slinged.

“I wonder who is getting knocked out first? It ain’t gonna be me, I’ll tell you that.”

“There is a buzz about everything and we’re ready to go,” said promoter Frank Warren. “We’ve got a European record crowd coming and I am delighted it is for Tyson because he deserves it. He has never defended his world title in the UK and the fans are coming out for him. It shows the love they have got.”

Whyte will make his first fight week appearance at tomorrow’s final press conference and the Hall of Famer predicts some typical knockabout rhetoric when the talking begins.

“It is going to be the usual sort of thing. I am sure Dillian will throw some insults as normally happens and Tyson will just bat it off. It will be what it is going to be but the most important thing is what happens when they step into the ring. That is what counts.

“I had a very brief conversation with Dillian about a week ago and we are all back on and ready to go. Tyson seems very at ease and very relaxed. He obviously knows the task he has got in front of him and he said to me this is the best he has ever felt, which means we will get something very special on Saturday night.”

Tyson Fury v Dillian Whyte for the WBC Heavyweight Championship of the World is live on BT Sport Box Office from 6pm on Saturday at Wembley Stadium.