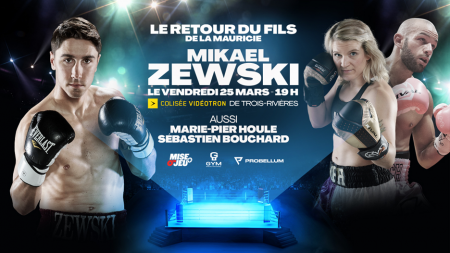 Like so many fellow brave Ukrainians, Serhii “El Flaco” Bohachuk (20-1, 20 KOs) has returned home in defense of his country fighting alongside his compatriots against the Russian invasion, which has forced his withdrawal from a scheduled March 25th showdown with Canadian super welterweight Mikaël Zewski (35-2, 23 KOs).

Vidéotron Coliseum in Trois-Rivières, Canada, will host its inaugural professional boxing event, starting at 7 p.m. ET, which is presented by Mise-O-Jeu, co-promoted by a Groupe Yvon Michel (GYM) with Probellum, and in collaboration with Deacon Sports and Entertainment Ltd.

Zewski, a former IBF North American and WBO NABO welterweight champion, is fighting at super welterweight for only the second time. His new opponent in the 10-round main event for the WBC Continental Americas Super Welterweight Championship is former world title challenger Carlos “Chema” Ocampo Manriquez (32-1, 20 KOs), of Mexico, whose lone pro loss was in 2018 to IBF Welterweight World Champion Errol Spence, Jr.

“We applaud Bohachuk’s courage to return home and fight with his countrymen in a real war,” GYM president Yvon Michel said. “Our hearts and prayers are with him and all Ukrainians who we wish for peace. Mikael is still in a very tough fight against Manriquez, the WBO’s No. 8-rated super welterweight.

“GYM is excited to co-promote this stacked card with our partner, Probellum, in our boxing series. Not only do we have some of the best Canadian boxers in action, but we are also thrilled to have three Olympians fighting in separate bouts, Arthur Biyarslanov, Joseph Ward, and Herbert Carvalho Sousa.”

In the 10-round co-featured event, undefeated super lightweight Movladdin Biyarslanov (9-0, 7 KOs) takes on Roberto Verdugo (10-3-1, 4 KOs), of Mexico. Fighting out of Toronto, Biyarslanov represented Canada in the 2016 Olympic Games. Verdugo is unbeaten in his last 6 fights with 5 wins and 1 draw.

Undefeated Irish super lightweight prospect Joseph “Mighty” Ward (6-1, 3 KOs) is scheduled to fight an opponent to named in a 4-round match. Ward is a 3-time European amateur champion, in addition to representing Ireland in the 2016 Olympics.

Highly decorated Brazilian middleweight Herbert Caravalho Sousa will make his pro debut in a 4-rounder vs. TBA. The 23-year-old Sousa was a gold medal winner at the 2020 Olympics and 2019 World Championships.

Former Canadian National amateur champion Sebastien Bouchard (19-2, 8 KOs) meets Ricardo “Riky” Lara (22-9, 10 KOs), of Mexico, in an intriguing 10-round bout. The popular Bouchard has been victorious in 10 of his last 11 fights.

Canadian welterweight Marie-Pier Houle (5-0-1, 2 KOs), returning to the ring quickly off her recent triumph (Feb. 24) over Yamilia Esther Reynoso by way of a 6-round decision, to face former World kickboxing champion Valentina Keri (5-5, 0 KOs), of Serbia, in a 6-round fight.

Also fighting on the undercard is Canadian heavyweight Alexis Barriere (4-0, 3 KOs) vs. Marco Antonio Canedo (4-1, 2 KOs) in a 6-round clash; pro-debuting Canadian super lightweight Spencer Wilcox vs. TBA, and Petar Gavrilovic (1-0, 0 KOs) vs. Greg Weeks (3-1, 3 KOs) in a pair of 4-round confrontations.

Tickets, starting at $25.00, are on sale and available for purchase on ticketmaster.ca. Prestigious seat reservations can also be made by calling (819) 519-1634.