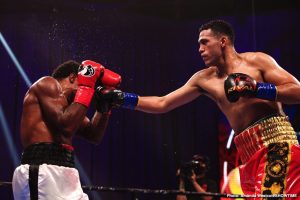 Unbeaten Benavidez (23-0, 20 KOs) failed to make weight yesterday so was stripped of the title with only Angulo able to win it. Over the course of the ten rounds, former world title challenger Angulo was punished over the rounds until the corner stopped the fight.

“I rate myself a solid eight,” Benavidez said. “I could have done some stuff better, but overall it was a great performance. I didn’t want to go too fast and leave myself exposed for some big shots. He’s a heavy puncher. But like I said, I like to do the stuff that nobody has ever done. Nobody has ever stopped him and I’m pretty sure nobody is ever going to make him look like that again. I demolished him from round one to round 10.”

“Everything everyone said about me is true,” Benavidez said. “I should be a professional and come in on weight, but this time I couldn’t do it. It’s my first time not making weight in eight years of being a professional.”

“I really have to talk to my promoter to see what’s next,” Benavidez added. “I’ll fight anybody to get back to the spot I was. You could see by this performance tonight, I could put on a great performance against anybody and people will pay to see that. I’m probably going to go right back into training camp to make sure I don’t miss weight.”