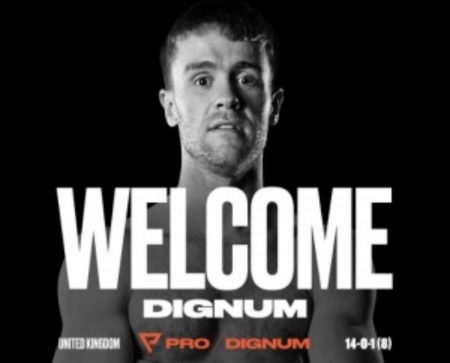 The Essex-born southpaw (14-0-1, 8 knockouts), who retained his title by beating compatriot Grant Dennis on Friday (March 11) at York Hall, London turned professional in 2016 and is yet to suffer defeat. Dignum, 29, originally won the vacant WBO European middleweight title in 2019 when he beat Conrad Cummings via knockout, and his reputation continues to grow as he builds towards a world title challenge.

A former Great Britain amateur, Dignum is rated highly by the WBO, sitting at No5 in the standings. His most recent performance against Dennis was particularly impressive as Dignum dominated following an early clash of heads, eventually securing victory courtesy of a sixth-round knockout to extend his unbeaten run. “Probellum is making a big impact in the boxing world, and I’m delighted to join their fantastic stable of fighters,” said Dignum. “I’m unbeaten as a professional and my ambition in the long-term is to fight for a world title. I have total confidence Probellum will help me achieve that goal and build on the success I have already achieved.”

“Danny is a fantastic fighter and we are delighted to sign him,” added Richard Schaefer, President of Probellum. “He is undefeated in 14 fights, which speaks volumes, and his performance on Saturday showcased his undoubted quality to fight fans around the world. “He has a very big future in the sport and it’s our job, at Probellum, to ensure he is given the best possible opportunities to achieve his ambitions and fulfil his impressive potential.” Other fighters to have signed for Probellum in recent weeks include IBF flyweight world champion Sunny Edwards, Liverpool-born brothers Peter (2-0, 1 knockout) and Joe McGrail (1-0, 1 knockout), unbeaten Shabaz Masoud (9-0, 2 knockouts), heavyweight prospect Ivan Dychko (11-0, 11 knockouts) and seven-time Irish national champion Steven Cairns (2-0, 1 knockout).