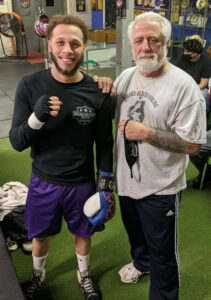 Jan. 20th ShoBox debut – Career changing opportunity for unbeaten super lightweight “Marvelous” Mykquan Williams
Last month, hours after receiving the disappointing news that his first fight in 14 months had been scraped, unbeaten East Hartford (CT) super lightweight prospect “Marvelous” Mykquan Williams (15-0-1, 7 KOs) received word that instead of fighting in relatively obscurity in Cancun, he would be making his ShoBox: The New Generation” debut, January 20th at nearby Mohegan Sun Arena in Uncasville, Connecticut.
Williams, 22, will headline against undefeated Colombian knockout artist Yeis Gabriel “El Tigre” Solano (15-0, 10 KOs) in the 10-round main event on SHOWTIME, airing live at 9 p.m. ET / 6 p.m., to kick off ShoBox’s 20th season. Mohegan Sun is only a 45-minute drive from Williams’ home, but his fan-base won’t be there rooting him on, unfortunately, because COVID-19 restrictions ban attendees.
ShoBox is renowned for building future world champions, 83 to date and counting, including Andre Ward, Errol Spence, Jr., Nonito Donaire, Deontay Wilder, and Williams’ fellow Nutmeg State fighter, Chad Dawson.
“I was upset to learn a week before my fight in Cancun that it was cancelled,” Williams explained. “I’ve been out of the ring for a while. I had trained hard and was in the zone. But the same day I found out that my fight in Cancun had been cancelled, I learned that I’d be fighting on ShoBox at Mohegan Sun. It was a curse and blessing. The opportunity to fight on ShoBox only a few weeks later, on a bigger and better platform, is a great opportunity for me.
“At least I don’t have to travel now and my opponent’s coming in, I believe, from California where he’s training. Fighting on ShoBox completely elevates my exposure. I have a chance to show the nation, if not the world, who I am and how good a fighter I am. I’ll be showcasing my skills on a great platform. It just came about. I think I’m the B side fighter, but that doesn’t bother me.”
Williams’ head trainer since he was an amateur and throughout his 4 1/2-year pro career is Paul Cichon. “This is like a blessing in disguise,” Cichon commented. “We went from losing the fight in Cancun and to Mykey now fighting in the main event on ShoBox, It’s great for Mykey and our team. This change is perfect for us. If Mykey performs like he think he will, doors will open-up for him once the gates open for boxing, after he beats this kid who has a good record. This is the right time!”
The 28-year-old Solano is a southpaw who is a former World Boxing Association (WBA) Fedebol lightweight champion. He’s fought only once outside of Columbia or Mexico, back on September 6, 2019 in his most recent action, when he won an 8-round split decision against 20-1 Elias Damien Araujo in Iowa. Solano’s other 14 opponents had an accumulative record of 67-227-12.
“Mykey has fought better opponents,” Cichon noted. “Solano is a strong southpaw with a 15-0 record and 10 knockouts. We expect him to come out blazing. I don’t think he’s fought anybody of Mykey’s caliber. Mykey has been moved much better.”
“I don’t know too much about him other than he’s a lefty and coming up in weight,” Williams added “They wanted to fight at 135 and agreed to fight at 138. I don’t have any issues fighting southpaws. I’ve fought five left-handers.”
Williams had been frustrated but he became more patient in terms of being unable to fight during the pandemic. Because he turned pro at 18, he’s had 16 pro fights to date, and he’s still only 22, and experiencing a lost year doesn’t adversely affect him as much as older fighters.
“I’m still young and don’t think about running out of time,” Williams concluded. “There’s nothing we could have done differently during the pandemic.
Williams is promoted by DiBella Entertainment and managed by veteran Jackie Kallen.
“I am thrilled that Showtime is giving Mykquan this opportunity to show the boxing world what he can do,” Kallen remarked. “This is his coming out party and I think he’ll now begin to make some serious noise in the 140-pound weight class. This is an important step on his journey toward a world title. I’m very excited and proud of him.”
If you believe in things happen for a reason, Mykquan Williams could very well be “Marvelous” on Jan. 20th, and his already bright career will be even more illuminated.