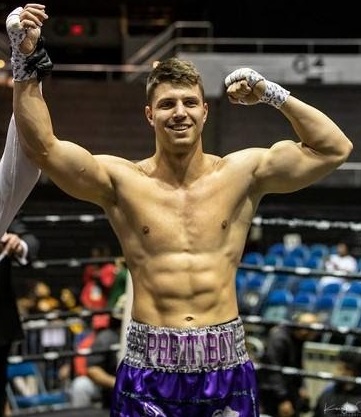 Undefeated Polish cruiserweight prospect Adrian “Pretty Boy” Pinheiro (6-0, 6 KOs) recently closed out his first year as a prizefighter in Nashville, knocking out veteran Eric Abraham (6-11, 3 KOs) in the opening round via the 3-knockdown rule.

“I could feel the punch in my knuckles on the first knockdown,” Pinheiro remembered. “I new I had hurt him, but I didn’t want to rush and get caught with a punch. I picked him apart and was surprised he got up after the second knockdown. He’s a tough guy. Everybody is a headhunter. I knew that he had been hurt in the head and was covering up, so I saw a body opening and took it.

“I went into the fight with a plan and flowed it. I was happy with my performance, but there’s always something we see that needs improvement for the next fight.”

Born in Poland, raised in Brazil, and now living and training in Orlando, the 24-year-old Pinheiro, was active this year, making his pro debut May 8th and fought five additional times in 2021, winning all by stoppage. 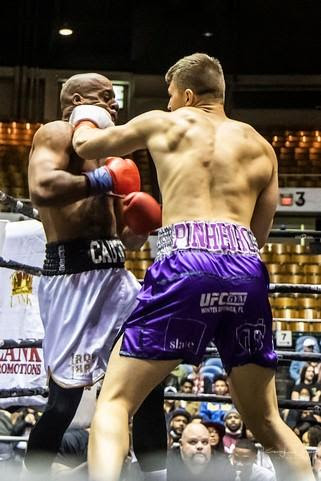 Standing 6’ 4” and cut, Pinheiro is a huge country music fan who looked forward to fighting in Nashville for the first time.

“We went to Broadway and all those bars with live music,” Pinheiro added. “We stopped by the Music Museum too. We were only there for a few days, and I was fighting. I do plan to go back and seem the real Nashville.”

Back home for the holidays and training at the Orlando Boxing Club, Pinheiro plans to make waves on higher platforms in 2022.

“I as very busy in 2021 and didn’t start until May,” Pinheiro concluded. “I hope to be as busy or busier in 2022. My goal is to fight on television and win a title or two. I’d really like to get a fight in Chicago to fight in front of a large Polish crown. I love my people!”

“I’m so happy for him because he works so hard,” Pinheiro’s manager/head trainer Tony Blanco commented. “I believe in building fighters accordingly and for his sixth pro fight, I got him an experienced opponent who I thought would give Adrian some good rounds. Adrian just crushed him. I’m so proud of him. He wants it so bad. He is young and hungry. He does well sparring bigger guys with good names. I’m excited to be working with him.

“In 2022, I’ll work to get him a TV fight. He’s very popular on Tic Tik and Instagram, even before he started boxing. We’re also looking forward to him fighting in a city with a large Polish community. Adrian Pinheiro is a star in the making!”