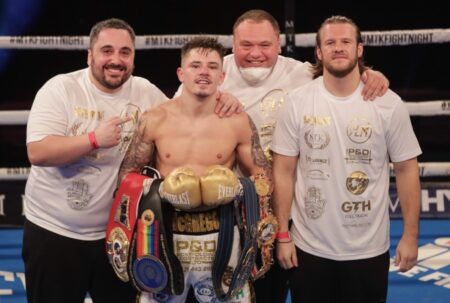 Scottish sensation McGregor (11-0, 9 KOs) is widely-regarded as one of the best rising stars in all of boxing, with the 24-year-old already firmly established as one of the top 118lb fighters in the world after just 11 fights.

He won the European title in emphatic fashion earlier this year, viciously stopping defending champion Karim Guerfi in the very first round, before following that up with a fourth round stoppage win against Vincent Legrand in August.
McGregor also holds wins over the likes of Kash Farooq and Thomas Essomba during his career, and is currently ranked #3 with the IBF, #6 with the WBA, #7 with the WBC, #12 with the WBO, and #10 with the Ring Magazine.

“I’m absolutely delighted to be signing with Probellum. I believe with Probellum backing me and guiding me I won’t just become a world champion, but I’ll also become a multi-weight world champion,” said McGregor.
“I’m looking forward to some huge nights ahead and hopefully getting closer to my dream fighting at Tynecastle Park and over in the States.”

“We are ecstatic to welcome a fighter of Lee McGregor’s ability to the team here at Probellum,” said Richard Schaefer, President of Probellum. “In such a short space of time he has proven himself as one of the best bantamweight fighters on the planet, and this is only the start of what we’re certain is going to be a long and successful career.

“He is already a superstar in Scotland and the UK, and we’re confident he can now take that popularity to a worldwide level. There will be more news revealed soon about Lee and the future is going to be very bright.”