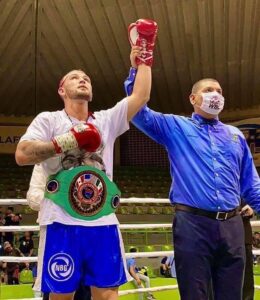 Dominguez, 28, added the NABF crown to his growing collection of hardware, which had already included the World Boxing Council (WBC) FECARBOX and USNBC (United States) straps.

“I sensed fear from my opponent in the beginning stages of the fight,” Dominguez said after the fight. “I was not going to be denied.”

Saturday night’s card, presented by De La O Promotions, was headlined by the tremendous power-punching Dominguez, who is rated No. 14 by the World Boxing Council (WBC).

“We’re excited about Santiago’s potential,” added his promoter, Roy Jones, Jr. Boxing CEO and co-founder Keith Veltre. “Now, he’s champion of three organizations, and climbing the ratings towards a world title fight, hopefully, in 2021. He’s the best welterweight in Mexico, rated number 14 by the WBC, and improving each fight.”

Cazarez, who had been unbeaten in his previous seven fights (6-0-1) when he entered the ring to fight Dominguez, had been previously stopped only once four years ago.

Santiago has been one of the most active fighters having been in action twice within four weeks, August 25th and September 26th.

“I’m taking a two-week vacation and then start camp in the United States to improve my skills through better sparring,” Dominguez concluded. “My job is to fight and take care of my family. My manager (Terry Hollan) finds me the opportunity, my team prepares me to win.”