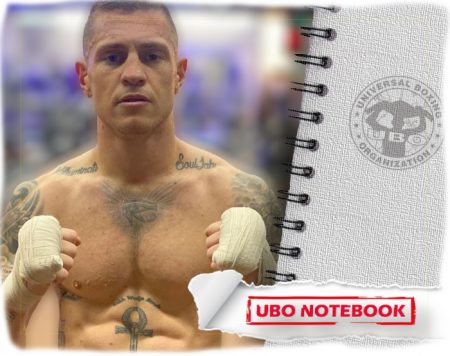 A month after winning the UBO World title with a second round stoppage of compatriot George Lumoly, recently awarded 2021 UBO Knockout of the Year honors, Liukhoto stopped journeyman Iwan Key in three rounds.

• Former UBO International Welterweight Champion Guido Emmanuel Schramm (26) continues his climb up the rankings, after moving up to Super Welterweight.

On December 29 he won the vacant WBC Latino title with a unanimous decision over fellow Argentinian, Nicolas David Veron in Buenos Aires, improving his unblemished ledger to 13-0-1 (8).

• The same can be said for Alfred Lamptey (10-0, 8 KOs) from Ghana, who won the UBO All-Africa Featherweight crown last March.

Lamptey, only nineteen years old and considered one of the biggest prospect in Africa, has since won WBC and WBO Youth titles, as well as the Ghanaian national title, at Super Featherweight.

On December 8 in Kiev, Ukraine, he recorded a unanimous decision over British veteran Danny Williams, and on December 23, in the same city, he stopped Indian Kuldeep Sing in two rounds to win the vacant WBC Asia Silver title.