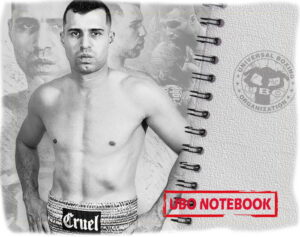 Pinto (pictured), who had come up short in a fight for the WBO Latino title in his previous outing last October, defended his Brazilian national welterweight crown and his WBC South America Welterweight title.

• When Declan Geraghty travels to the Czech Republic to fight South African David Rajuili for the vacant UBO World Super Lightweight title on September 4, he will be accompanied by a crew from FIGHTER365, who will do a documentary about the Irishman.

This will actually be the second part, and part one can be seen HERE. They will also be doing live Instagram videos throughout, so give them a follow.

• UBO Baltic Super Middleweight Champion Ion Barsan scored his fourth straight victory on July 10, when he stopped one Dragos Nicolae in the first round of their eight rounder in Barleben, Germany.

“The Romanian Pitbull” is on a fascinating journey, turning his career around. His misleading record now stands at 7-17 (5).

We wish him the best of luck as he continues to build on his impressive resume.

• Congratulations to former UBO Inter-Continental Middleweight Champion Christian Schembri and wife Stephanie, who became parents to baby-daughter Mila this past May.

Less than two months later, Christian improved his professional record to 20-9 (8) when he stopped Polish journeyman Mariusz Biskupski on home soil in Malta.