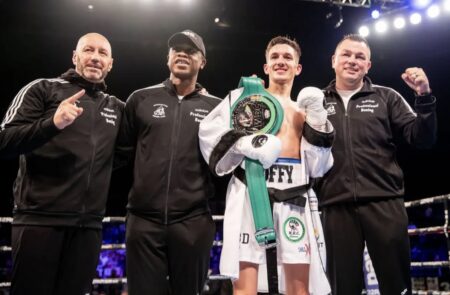 A host of BCB fighters were in action Sayurday night at the Utilita Arena in Birmingham writes Matt Farrington.

Worcester’s Owen Cooper, Telford’s Macauley Owen and Walsall’s Ryan Woolridge were all victorious with Cooper and Owen getting their opponents out early with impressive stoppages.

Towards the top of the card, two of BCB’s brightest prospects, Liam Davies and Danny Ball were in action on a Frank Warren show full of Midlands boxing talent.

Ball looked like he was going to try to box and counter at the start of the fight, but as Essuman met him in the middle, a scrap ensued.

Essuman looked compact, sharp and powerful as he ripped into Ball’s midsection early on with hooks and uppercuts. However Ball rallied back with sharp counters and combinations. Both men were trading hard shots.

A shootout from the start, it was unlikely that we would hear the final bell. Ball went down in the sixth after a barrage of shots from Essuman, who had him cornered. Blood poured from Ball’s mouth as the referee called off the fight.

Essuman, the winner, retains his belts but both men have gained the respect and admiration of the many watching, for their grit and fearlessness.

Shortly after this, Liam Davies took to the ring to make his 11th appearance in a pro ring.

This was a short turnover for Liam who fought in the same arena just two months earlier and scored a knockout victory.

He returned with the same explosive energy and pleased his loud crowd of fans from his hometown Telford by delivering an entertaining scrap that was full of hard exchanges of punches.

His opponent Dixon Flores put a lot of pressure on Davies from the opening bell and Liam had to take some good punches and adjust to win. Every round was competitive but ultimately the BCB man showed his class against a fiery and gritty opponent, who gave Davies no respect till the final bell.