Vazquez pounds out unanimous decision over Argel in Philly 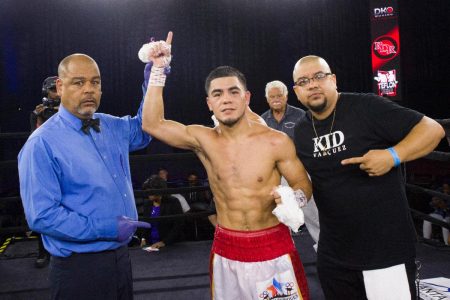 Featherweight contender Edward Vazquez pounded out a eight-round unanimous over tough Jose Argel in the main event that topped a seven bout card at the 2300 Arena in Philadelphia.

The event was promoted by RDR Promotions.

Vazquez of Fort Worth, Texas was able to figure out Argel’s come-forward style early in the contest as the Texan started slowing down Argel with body shots with both hands. Vazquez was equally effective with the uppercut. Argel continued to attempt to press but that was to his detriment as he ate shots to his flank and face from the pinpoint Vazquez.

The bout was thrilling as Allen boxed very well behind a nice jab. Barajas started getting through with left hands and that forced Allen to return with some solid counter rights. The fight really picked up over the final three rounds, with some furious exchanges that each fighter held on at various times in the fights.

Two judges preferred Barajas work as he the visitor took two cards by 58-56 tallies, while a third card read even at 57-57.

Barajas of Mexico won his second straight fight over a Philadelphia-based fighter at the 2300 Arena and is now 18-8-1. Allen of Philadelphia is 16-2-1.

19 year-old prospect Isaiah Johnson notched his fifth consecutive stoppage as he took out veteran Rondale Hubbert in the opening round of their four-round junior welterweight bout.

Johnson registered three knockdowns and the bout was stopped at 1:57.

Johnson of Sicklerville, New Jersey is 5-0 with five knockouts. Hubbert of Duluth, Minnesota is 14-23-3.

Johns of Philadelphia landed a right hook that put Chamberlain down face-first and the bout was over.