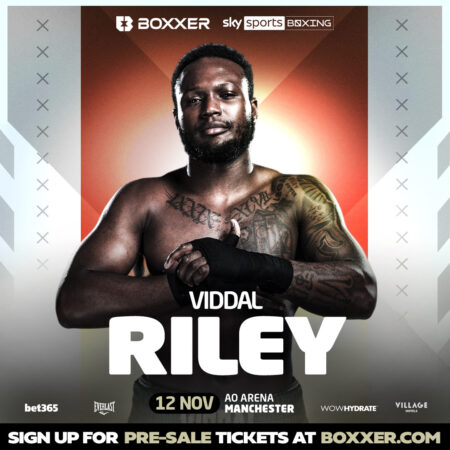 Fresh off a stunning first-round stoppage win in his last outing, undefeated cruiserweight prospect Viddal Riley (6-0, 3 KO’s) is today announced as the latest addition to the all-action BOXXER: Manchester card taking place at the AO Arena on Saturday, November 12th.

Screened live and exclusively in the UK & Republic of Ireland on Sky Sports Boxing, it will be Riley’s second time competing in the famed Manchester arena, having debuted for BOXXER there earlier this year on the undercard of the record-breaking BOXXER: Khan vs Brook event.

Having showcased his technical ability in his BOXXER debut, Riley – a national champion and Team GB member in his amateur days – then demonstrated his ferocious power in June, stopping the veteran Jone Volau in just 51 seconds.

Riley’s combination of proven power and high level of technical ability have made him one of the most hotly-tipped young boxers in the UK today.

In November, he heads to Manchester in search of a seventh consecutive professional victory which will continue his climb up the rankings and towards contender status.

With over two million followers across his various social media channels, an army of worldwide fans will be following Riley’s mission to Manchester, where he joins a card which also features Olympic heavyweight hero Frazer Clarke and Dalton Smith, who defends his British super-lightweight title against Kaisee Benjamin.

A world title unification bout headlines the card, with WBC and WBO world super-welterweight champion Natasha Jonas (12-2-1, 8 KO’s) heading over from Liverpool intent on taking the IBF championship from Canada’s Marie-Eve Dicaire (18-1, 1 KO) and adding it to her collection.

“Viddal Riley is an incredible talent who has made a major success of himself across multiple industries. There’s a huge level of interest in everything he does. Now his focus is entirely on boxing and on rising to world champion status. I think he has all the tools to go all the way,” said Ben Shalom, BOXXER Founder and CEO.

“With his combination of skills and personality, he’s got the potential to become a global superstar. Manchester on November 12th is the next step of that journey. The cruiserweight division as a whole is rising and becoming as exciting for us as it is for the fans. There is a lot more to come from that division.”

Rising star Riley remarked, “I am back! It feels good to return to the ring after one of my career-best performances last time out and I plan to build on it. I’d like to fight once more this year so it’s important that I win in style and take minimal damage. Watch the journey continue, and hopefully by the end of next year, a title is around my waist!”

Adam Smith, Head of Boxing Development at Sky Sports, added: “What an exceptional talent Viddal Riley is! To make a success of yourself in one field is impressive, but to do it across multiple fields is something else.

“Riley made his name in music and entertainment, but he was a very talented amateur boxer long before either of those came on the radar. He was a Youth Olympian and national champion as an amateur and now he’s set on becoming a world champion in the professional game.

“Viddal Riley has reached the top tier in everything he’s done until now, as he aims to one day be a world champion in our sport.”

Ticket holders for the Sky Sports BOXXER event will be able to access the AO Arena from 16:45pm.

These tickets will also grant free access to the Hatton v Barrera exhibition match, promoted by Europa Combat, which is expected to begin around 10:30pm after the BOXXER main event and show has concluded.

1. If I’ve got a ticket to the Hatton v Barrera & Hardy v Sanchez show, can I also attend the Sky Sport BOXXER event?

Absolutely, your ticket gives you free access to the BOXXER event and you can arrive at any time from 4:45pm onwards.

Apologies but you will not be allowed to leave the venue and come back in. This is standard venue policy.

3. Can I transfer my ticket to a friend or family, so I can watch the BOXXER event and then they can watch the Hatton v Barrera & Hardy v Sanchez show?

We are sorry but all tickets are non-transferable.

4. Why are there two separate events?

They are two separate events, which have been organised by two separate promoters, with Europa Combat taking over the venue when the BOXXER event has concluded. But purchasing a single ticket for either event will give access to both events.

5. Do I sit in the same seat for both events?

Yes, your seat will be the same for both events.