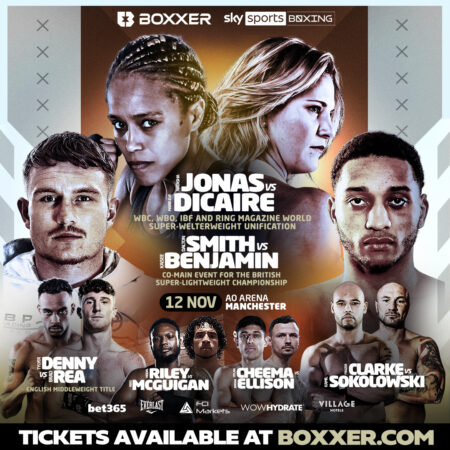 Riley (6-0, 3 KOs) made light work of Jone Volau back in June with a first round stoppage at Wembley Arena.

And the 25-year-old returns to the AO Arena in Manchester, where he defeated Willbeforce Shihepo on points, looking to continue his impressive ascent up the rankings.

BOXXER CEO & Founder, Ben Shalom said: “Viddal is a very good boxer, who is still very young and he should be taken very seriously.

“Coming out of Tottenham and training in East London, Viddal understands the importance of honing his craft. Training, sparring, watching, listening and learning the traditional way.

“Undefeated at 6-0, Viddal sets himself goals with each opponent and understands that hard work will push him on for domestic titles in 2023, with an ultimate focus of a world title down the line.”

Since turning professional back in 2018, Riley a 2014 Team GB Youth Olympian has enjoyed a flawless start and built up a huge following across social media

And he is intent on laying down another marker to the cruiserweight division.

Viddal Riley said: “My mission continues on November 12th in Manchester. Ross McGuigan is undefeated and will do his best to keep it that way, but I know my level and will display it in full come fight night.”

In McGuigan (3-0), Riley faces a tough opponent who is keen to make an impression live and exclusively on Sky Sports.

“I’m really looking forward to showcasing my skills on a massive platform with Sky Sports and BOXXER, where I plan to announce myself to the rest of the cruiserweight division.”

Elsewhere on the November 12 card, Dylan Cheema will be looking to extend his unbeaten record when he fights Jordan Ellison.

Cheema (7-0, 2 KOs) became the BOXXER Series: Lightweight champion back in April when he defeated Rylan Charlton – and the Coventry fighter is expected to have his legion of followers cheering him on in Manchester.

Oldham middleweight Jack Kilgannon will be keen to put on a show for the local fans as he joins the undercard.

And Mancunian welterweight prospect Clark Smith – a Gallagher’s Gym stablemate of Natasha Jonas, who fights Marie-Eve Dicaire for the unified world titles in the main event – will be in action too as he bids to continue his unbeaten start to life in the professional ranks.

Tickets are on general sale now. Go to boxxer.com