Viktor Kotochigov: I’ll Prove My Last Fight Was a Blip! 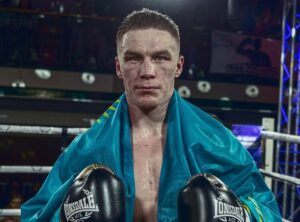 Viktor Kotochigov feels the result of his last fight may have been a blessing in disguise – as he prepares to take on Gary Cully on next Friday’s huge #MTKFightNight.

Kotochigov (12-1, 5 KOs) faces undefeated Cully (11-0, 5 KOs) for the vacant WBO European lightweight title at the University of Bolton Stadium on March 12, live in the US on ESPN+ in association with Top Rank, and worldwide on IFL TV.

The Kazakh fighter came up narrowly short in a back and forth battle against Maxi Hughes last October, but insists he has made plenty of adjustments that will come in handy against Cully.

Kotochigov said: “I am looking forward to this fight. In preparation for the fight, we did a lot of work, with many hours in the gym and in sparring. I can safely say that I am ready for battle.

“Hunger is always inherent in fighters striving for the greatest goals. I am determined to win and prove that losing against Maxi Hughes was a blip.

“I have watched Gary Cully’s fights. We studied with my coaches his technical and tactical actions, and we know what to expect from him. I’m looking forward to a beautiful and spectacular fight that fans will love.”

Liam Paro Defeats Terry Tzouramanis in Brisbane, Australia Kyoguchi on Way to The US For His WBA Title Defense on March 13th