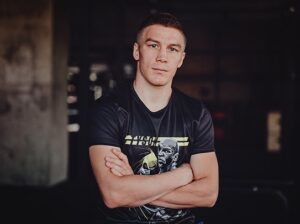 Viktor Kotochigov is determined to reach the ultimate heights in boxing – but knows to do that he first must defeat Gary Cully on Friday’s action-packed #MTKFightNight.

Kotochigov (12-1, 5 KOs) faces undefeated Cully (11-0, 5 KOs) for the vacant WBO European lightweight title at the University of Bolton Stadium, live in the US on ESPN+ in association with Top Rank, and worldwide on IFL TV.

The Kazakh fighter is relishing the prospect of fighting in England, and wants to show the fans watching around the world that he has what it takes to become one of the best in the lightweight division.

Kotochigov said: “This year, my team and I have set very ambitious goals. There are big fights and title fights out there for me, and the main thing is to believe in yourself.

“This fight with Gary Cully is my chance to declare myself in the lightweight division, and a big win here could bring a future opportunity to fight for the world title.

“I’m very excited to be fighting in England too. England is one of those countries where boxing is loved and understood. The boxing culture itself is highly developed there, so I can’t wait for fight night.”