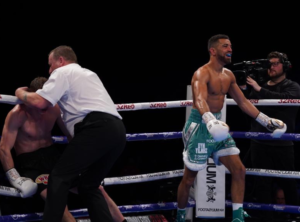 Sam Maxwell says that teaming up with new trainer Steve Maylett can lead to him knocking out Akeem Ennis Brown when the two men meet in their highly-anticipated showdown later this month.

Both men have had their fair share to say in the build-up to the fight, and Maxwell is the latest to make his intentions perfectly clear.

Maxwell said: “Steve Maylett has taken me on at late notice, but we have bonded so well. It’s a great team and I feel part of them. It wasn’t ideal to start, but I am more than happy and it’s starting to pay off.

“It’s short notice so Steve isn’t changing too much, but there are little things that will pay off. I think I can knock Akeem out. Steve has been saying I don’t need to put power in my shots because it’s there.

“I carry my power and he has something to worry about from round one to 12. Akeem doesn’t have the same thunderous power as me. Taking a lot will damage him as well.

“Maybe he has had to take more gambles than me as a pro. He hadn’t done it as an amateur and perhaps had to take harder fights to get his shot. Akeem has the better resume than me. He has had to have hard fights and come through them.

“He is really good at what he does. He throws a lot of shots, is very fit, unorthodox and awkward. He gets people to fight his fight.

“The KO stats might be a little misleading, but that doesn’t hide the fact that I punch harder than him and the power is with me. At this level anyone can punch. He will hit hard and I respect his power, but the edge is with me in that department.”