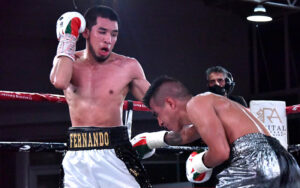 The combination of Chiquita González Boxing, with the support of PHILLIPS ASSA-ABLOY, with Mexican Americans Fernando “Leoncito” Díaz and Jesús “Chiquito” Haro was proved, due to great performances, during an event that took place behind closed doors at the Training Center Fire Sports in the city of Tlaxcala.

“Leoncito” went on the attack, while Rojas on the ropes tried to counter the onslaught of the Mexican American, surprising everyone.

In the second, Rojas applied pressure, but Diaz’s right negated that with two crisp uppercuts.  In the next round, “Leoncito” and Rojas managed to land hard punches, showing determination and skill.

Fourth round, Fernando let his hands go, with left hooks and effective rights, also punishing Rojas with a hook to the liver, trying with all his might to knock him down. But the Texcoco fighter did not back down and fought back with gusto.

During the sixth round, Diaz did more damage to Rojas with the right, punishing him on several occasions; “Leoncito” made it tough for Edgar,  by moving backwards and managing to dodge the blows thrown by the Texcoco fighter.

“CHIQUITO” GETS THE WIN

In the semi final fight, Mexican American Jesús “Chiquito” Haro, from Merced, California, USA and the representative of the state of Oaxaca, Edgar “Puma” Reyes, threw a few haymakers and many other varieties of punches in a veritable strawweight strategy match.

The first round was the traditional study spell. But Haro was looking to land the power shots on Reyes. During round two, Referee Rafael Saldaña asked them for more action, as both proved  prudent about throwing caution to the wind.

The Mexican took the initiative to look for his rival; while Haro managed to dodge the blows and continued studying his rival.

“Puma” was seen to be fiercer and Haro was relying on strategy and waiting to counter attack.