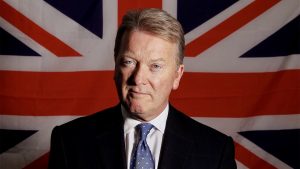 “I spoke to [Fury] Monday morning. He was quite frustrated when [the Arum interview came out]. I was unaware of it. It came out of the blue … Fury told me, ‘I want to fight this year.’ That’s my job, to make sure he fights this year,” Warren told BT Sport. “Fury fighting [in February 2021] is not happening. He’s fighting this year. Either [with Wilder], or another fight. We want to fulfill his contractual commitment. He’s not going to wait till February.”

“Let’s cut through it—what’s the fight everybody wants to see? I don’t want to hear about Dillian Whyte, and all these guys. The fight everybody wants to see is [Fury vs. Joshua]. That is the fight. Any boxing fan, and certainly any British boxing fan, that’s the one. All the others, you go down that list, and put out a poll, no one would vote for other fights … Let’s get the fans what they want.”