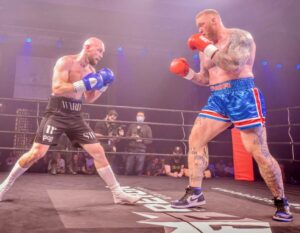 Bjornsson has become one of the most recognisable men on the planet in recent years, after winning the 2018 World’s Strongest Man, 2018 World’s Ultimate Strongman, 2018 to 2020 Arnold Strongman Classic and Iceland’s Strongest Man every year from 2011 to 2020. He is also known for playing Gregor ‘The Mountain’ Clegane in the critically acclaimed HBO series Game of Thrones.

He is set to take on strongmen rival Eddie Hall in a fight being dubbed as ‘The Heaviest Boxing Match of All Time’ later this year, and sees MTK Global working with CoreSports to serve as the official boxing advisors for the clash.

Before Bjornsson turns his attention to the fight with Hall in September 2021, he will get some rounds under his belt when he first meets Ward in this weekend’s intriguing battle.

Ward has a professional boxing record of 13 wins and just one defeat, and won the WBO European light-heavyweight title against Liam Conroy in June 2019, with the two men involved in a bout that many fans deemed the Fight of the Year. He has since moved up to cruiserweight, where he defeated Jone Volau in September.

Along with the Ward vs. Bjornsson extravaganza, there is also a packed undercard, including undefeated sensation Rohan Date, who is scheduled to face Moaz Allam.