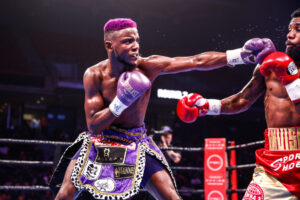 “I always knew I was going to get here,” said Colbert. “It’s all God’s plan. This is just going to be another day for me and I’ll show everyone why I’m one of the best 130-pounders in the world.”

The 24-year-old Colbert has shot up the rankings of the 130-pound weight class and believes that a victory on Saturday night will lead to bigger opportunities in the jam-packed division.

“This is one of the most stacked divisions in boxing and I love competing in it,” said Colbert. “It’s great to be getting noticed in a division that has this much talent, and hopefully it’ll lead to me getting the big fights that I need. I don’t feel like there’s any certain fighter I’m targeting, but Gervonta Davis, Leo Santa Cruz and Jamel Herring would all be great fights for me. Beating them would help me become ‘the guy’ in the division.”

Colbert’s rise continued in his last fight, as he scored a 10th-round knockdown against former champion Jezreel Corrales on his way to a decision win while showing an impressive array of skills against a fighter determined to slow the action through holding and other veteran tricks.

“Against Corrales I learned not to rush,” said Colbert. “It’s not a sprint, it’s a marathon. I can’t just go rush in there and expect everyone to get knocked out. I had to take my time, do what I do best and stick to my game plan.”

In the 26-year-old Arboleda, Colbert will be presented with another rising 130-pound contender with his own sights set on emerging amongst the elite in the division. Arboleda has won five of his last six fights by stoppage and most recently dropped Jayson Velez on his way to a decision victory in February on SHOWTIME.

“Come December 12, I’m ready for whatever he brings,” said Colbert. “I expect him to bring pressure and ‘try’ to make me tired because that’s the only chance he has. He can’t outbox me. That’s not happening. But I love to bang inside and I’m ready for whatever he does. I hope he doesn’t run or clinch me because I’d love to get the knockout and get him out of there early.”

The Brooklyn-native Colbert has continued to work with his long time coach Aureliano Sosa in his hometown through the difficulties of the pandemic. Those difficulties have led to Colbert sparring with larger welterweight and super welterweights in camp, which Colbert believes could help him with the power Arboleda will bring into the fight.

“Training camp has been going great for the most part,” said Colbert. “It’s just been a little hard finding sparring partners. But because it’s been difficult to find fighters at my weight I’ve actually been sparring with 147 and 154-pound fighters. I honestly love that because it prepares me better, and who’s to say that Arboleda won’t have power like them? I’m on weight now, though, and ready to put on a show on December 12.”

Kieron Conway: “I Have No Reason to Avoid Anyone” Dominguez & Lara Make Weight – RJJ Boxing Fight Card Weights From Mexico