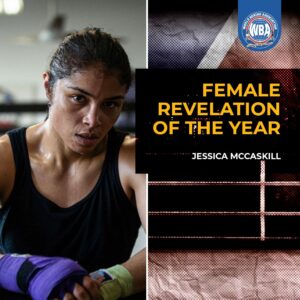 To her surprise, after an explosive fight, Belleville, Illinois-born boxer Jessica “CasKilla” McCaskill made her way into the golden pages of women’s boxing worldwide. On August 15, 2020 in Tulsa, United States, with the seal of Matchroom Boxing, McCaskill defeated the legendary Cecilia “First Lady” Braekhus in a majority decision and became the owner of the 147-pound titles, this ending the 11 immaculate years reign of Braekhus.

McCaskill earned the recognition as the Female Revelation of the Year 2020 with great merit. McCaskill had had a major test against Katie Taylor ten months before the fight that changed her life forever against the Norwegian, who had achieved 25 successful defences and was undefeated in 36 performances.

The new queen of the welterweight division entered the amateur ranks in 2008 after approaching a gym with the only intention of being in good shape. However, she soon fell in love with the sport and even managed to win the prestigious Golden Glove Championship three times. In 2012 she moved to Chicago, where she worked in a bank. CasKilla never stopped working and training in parallel until the present.

By 2015 she became professional. In 2019 she became the World Boxing Association Super Lightweight Champion by defeating Argentina’s Anahi Sanchez, and a few months later she made the first successful defense against Argentina’s Erica Farias, whom she had already defeated a year earlier.

“The Queen of Chicago” is enjoying a great moment waiting for the next challenges, among which is the rematch agreed against Cecilia Braekhus.

WBC: A Great Start to 2021 The WBA Revelation of The Year Award Goes to Joshua Franco