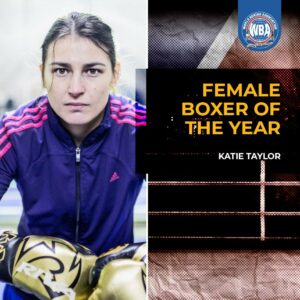 If 2020 had a great female boxing protagonist, it was undoubtedly Katie Taylor. The Irish lady showed that she is still at the top of the pound for pound lists by her two title defenses of her championships and that is why she has been named Female Boxer of the Year by the World Boxing Association (WBA).

In August, Taylor had a great moment when she fought against Belgian warrior Delfine Persoon. After a long period of inactivity (she hadn’t fought since November 2019), the former Olympic medalist was back in action at the Brentwood Matchroom Camp for a rematch with the toughest opponent she had ever had in her career. It was another fierce fight but she was able to come out with her hands up having defeated her a second time to retain her 135-pound WBA, WBC, FIB and WBO crowns.

But the 34-year-old fighter’s actions didn’t stop there. In November she returned to Wembley and retained the titles by defeating Spain’s Miriam Gutierrez by unanimous decision in another clash of talent.

Taylor started out as a professional in 2016, making her debut with a three-round technical knockout victory over Karina Kopinska, and by the same year, in her fifth fight, she had already won the WBA’s International belt.

Katie started boxing as a child with her father Peter Taylor, who was an outstanding light heavyweight fighter in the 1980s. However, in Ireland the practice of boxing was limited for women so little Katie turned to soccer as well. In 2001 she made the first female fight in Irish territory while she was part of the national soccer team, where she played 11 games between 2006 and 2009, years in which she had already become European champion as an amateur boxer.

Taylor has also been honored with a film: KATIE, a documentary film directed by Ross Whitaker.

Katie is a warrior and one of the most impressive talents to ever step into a boxing ring. The WBA is pleased that Katie’s first world championship belt was with the pioneer organization and that she is still a champion today. Congratulations to the WBA Female Boxer of the Year.