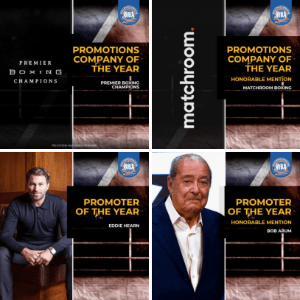 The pioneer organization, in recognition of those in charge of organizing boxing around the world, also awarded Honorable Mentions to Matchroom Boxing and the legendary Bob Arum, for their work during a complicated year like the one that just ended.

For his part, Hearn, from Matchroom Boxing, has proven to be one of the most influential promoters and has taken his company to the top of today’s boxing.

The legendary Bob Arum, from Top Rank, took the lead in a huge effort to restore boxing and was the first to return after the break by organizing the first post-Covid-19 world title fight between Joshua Franco and Andrew Moloney in June.

The WBA congratulates the winners and hopes that 2021 will be a successful year for all of them.

With the release of the Promotions Company of the Year and the Promoter of the Year, begins the publication schedule of the 2020 WBA annual awards. After consulting with fans through social media, the pioneer organization will announce the winners in the following order starting today until January 9th:

January 6th
Trainer of the Year

January 7th
KO of the year
Fight of the Year

January 9th
Boxer of the Year