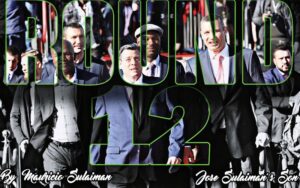 What an explosive way to begin this 2021, which the World Boxing Council has designated “The Year of Boxing” as we will celebrate life with a large number of anniversaries of historic dates derived from our sport.

The fight between “King” Ryan Garcia and Luke Campbell was amazing and this young star has reached the major leagues, and is faced with a series of great fights in the lightweight division in sight.

This Saturday, January 2, the first card of 2021 was held. It took place in Dallas and there was an important attendance of fans who witnessed a great fight.

Both boxers were WBC international champions and also WBC silver champions. After a long period of negotiations during the complicated era of Covid-19, the fight was settled for this date and the WBC interim lightweight championship was disputed.

The young, undefeated Mexican American and social media sensation against the experienced, seasoned Brit Luke Campbell who had already fought important battles against world-class boxers such as Vasily Lomachenko and Jorge Linares.

Garcia came from two victories in the first round, only 78 seconds of combat, and this was without a doubt a hard test that many thought he would not be able to overcome.

There is an element that we must highlight and that is of great importance: Eddy Reynoso. Eddy took on Ryan to bring him to the level that we can see him now and the handling of the corner, especially in the crisis after the knockdown, was majestic.

Eddy Reynoso has become the best boxing trainer of today. Even though it was such a difficult year, he devoted himself mind, body and soul to his boxers and managed to crown three champions! Namely Luis “Panterita” Nery in super bantamweight, Saul “Canelo” Alvarez at super middleweight and finally “King” Ryan Garcia.

I talked to Eddy at the end of the year, while he was in the solitude of a boxing camp, away from his wife and daughters. Ensconced in the camp with his pupil he was patiently waiting for the night of the fight. That is the sacrifice that nobody observes, that nobody appreciates or values.

I admire this young Mexican trainer because one day he may be in the corner of Canelo in the most important fight of the year and in the most luxurious suite in Las Vegas and the next day we can see him in the corner of a humble 4 round debutant in a small town in Mexico. Congratulations Eddy, that is what Mexico and sports needs, committed people to continue giving great moments and opportunities to those who deserve it.

On December 30 I turned 51 years old and I enjoyed that day very much in the company of my family. I grew up traumatized because that date is very complicated as before the time of social networks nobody remembered me. Many times even my family didn’t congratulate me until the afternoon!

I spent all my childhood celebrating the New Year in Ciudad Valles San Luis Potosi, there we spent the holidays to be with our grandfather Don Elias. My cousin Toño celebrates his birthday on the 29th so they always made a special party for him , and since they all stayed up all night and on the 30th the family was distracted, preparing the end of the year party. I spent many years with great sadness of never knowing what a birthday was.

Now it’s different, with the internet, cell phone and social media, as everyone congratulates me! I received many calls, emails, messages on WhatsApp and even on Twitter and Instagram. Now I know what our special day feels like!

WBC Champions line up. We start 2021 with great talent and many world champions at the WBC and it will undoubtedly be a great year for our sport.