WBC Crowned Ali as the “King of Boxing” 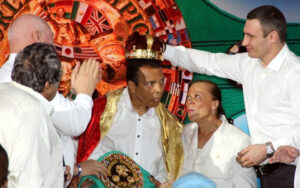 Muhammad Ali was witty, with a mischievous sense of humor and a heart warming sense of fun. I always remember that photograph in which my father appears pretending as a referee between the great champion and the Mexican comedian Mario “Moreno” Cantinflas, showing the wonderful good humor of both. An electric synergy in Mexico City.

We will never ever forget the tremendous battles, in which he fought with Joe Frazier, the last of them in the Philippines, considered the greatest of all time in the heavyweight division, as well as his incredible performance in Kinshasa¡, when he reconquered the title stripped from him, after his refusal to go to Vietnam.

His coronation was magnificent. Almost as dramatic as when Sony Liston crashed after walking straight into a lightning right counter, and crumpled at his feet, in his first defense of his title on May 25, 1965, in Lewiston, Maine.

This fight was a breakthrough, marking a milestone in the history of communication channels, since that it was the first that was transmitted through a satellite, the one they called “The Early Bird.”

There are thousands of books from Muhammad Ali’s life, setting down his wondrous achievements as a boxer and as a gold medal-winning athlete at the Rome-60 Olympic Games, which opened the way for him to be the greatest in the world of boxing.

Don José visited him many times at his home in Beverly Hills, California, and there the man who was an incorrigible joker talked about humanity, being like a grain of sand from the desert, while he practiced one of his favorite hobbies, conjuring sleight of hand, at the same time as the barking of his impressive dogs echoed.

I accompanied my dad on several occasions. That extraordinary man impressed me since I was a child and forever, because of his unique magnetic personality, exuded, when he came to visit our home in Mexico City.

We do this small tribute along these tangential lines, because we are celebrating once again the anniversary of his birth, which was January 17, 1942. We celebrate the life of a man that has been is, and well forever be considered the best boxer of all time.

Muhammad Ali was amazing in the world of boxing. Because he dazzled like a supernova blazing a new brightly illuminated arc across the horizon, to revolutionize this sport and with his unique personality gave another face to the show of hands.

Four years later, on June 3, 2016, he passed away at the age of 74. There, stellar chapters of his story crowded and permeated our thoughts and minds, lodging and embedding themselves indelibly in our memories.

Moments were recorded, in which he spoke to us about various aspects of his life, his family, his childhood, plus his rivals, explaining and emphasizing that he never despised any of them. But rather understood the fundamentals of what boxing truly was, To have conquered the world and forever be “The King of Boxing,” within the confines of this world and even beyond it.