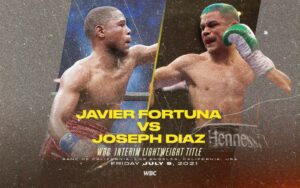 Recently, WBC Interim Lightweight Champion Ryan Garcia notified the WBC that he was taking a leave from boxing to address ongoing health issues.  The WBC fully and unconditionally supports Champion Garcia.  The WBC will stay close to him during his process, and the WBC Board of Governors will assess his situation once he is ready to return to the ring.

The WBC has received a request to sanction the bout between the #2-rated Lightweight Javier “El Abejon” Fortuna (36-2-1, 25 KOs) against the #5-rated Super Featherweight contender Joseph “Jo Jo” Diaz (31-1-1, 15 KOs) for the WBC Interim World Lightweight Championship.  The Fortuna v. Diaz bout is scheduled to take place on July 9, 2021, in Los Angeles, California.

A recount of the backdrop that led to Javier Fortuna’s request puts that request into the proper context.

In light of the fact that Javier Fortuna has not been able to compete for a WBC Championship due to reasons outside his control, and based on the merits of his request, the WBC has decided to grant it.  Accordingly, the WBC will sanction the Javier Fortuna v. Jo Jo Diaz bout for the WBC Interim World Lightweight Championship. The winner will fight the winner of Haney vs Linares.

On This Day: Bob Foster Defended His World Title Against Andy Kendall Carlos Cañizales Clashes With Esteban Bermúdez This Friday