WBC on Oscar Valdez and the positive test for Phentermine 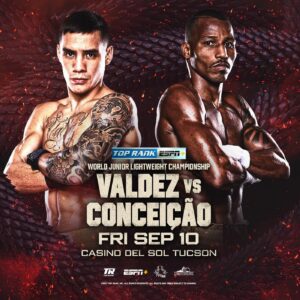 The WBC created its Clean Boxing Program in collaboration with VADA. The WBC-CBP is one of the best and most comprehensive antidoping programs in sports. The purposes of the WBC-CBP include, but are not limited, to the following: (1) safeguard the health and safety of boxers; (2) educate boxers, trainers, teams, and members of the boxing community; and (3) impose requirements and take measures that are equitable, just, and fair by examining every situation on its particular merits.

The WBC-CBP administered by VADA List of Prohibited Substances includes hundreds of substances and metabolites. There are marked differences among the different categories of prohibited substances in terms of their effects, dangers, and contraindications, there are extreme differences from any given substance to the others.
Upon learning of Oscar Valdez’ adverse analytical finding, the WBC formed a panel that included scientific and nutrition experts to investigate, analyze and evaluate all the available facts and evidence, and to recommend to the WBC how to proceed in this particular case. The WBC panel held an inquiry hearing with all the interested parties, including Champion Valdez and his team, and representatives of the overseeing commission and of the promoter. Champion Valdez and his team have been 100% cooperative at all times during the process. The WBC panel also held internal meetings to analyze the information and materials it received, so the recommendation to the WBC could be well informed, educated and fair.

Among the factors the WBC panel considered are: (1) a urine sample collected from Champion Valdez on August 13, 2021, yielded an adverse analytical finding for Phentermine; (2) samples collected on July 22, 2021 and on August 30, 2021, tested negative; (3) Phentermine is an appetite suppressant prescription medication with no documented in-competition performance enhancing effect or advantages; (4) Champion Valdez has been a boxer for 19 years with a long and celebrated amateur career, which included participating in two Olympic Games; (5) during his heralded trajectory as an amateur and professional boxer, Champion Valdez has tested negative in numerous antidoping test, including more than 30 as a professional; and (5) Champion Valdez has insisted in enrolling in the WBC-CBP, and has demanded antidoping testing in all his bouts.

After conducting its own analysis of the situation, the Pascua Yaqui Athletic Commission, which is the local commission overseeing the Valdez v. Conceicao bout, has confirmed its commitment to allow the bout to take place in its jurisdiction as originally scheduled on September 10, 2021.

The WBC Panel`s recommendation to the WBC, which the WBC Board of Governors has authorized and adopted, comprises:

1 The WBC will officially sanction the Valdez v. Conceicao bout for the WBC World Super Featherweight Title, which will take place as originally scheduled on September 10, 2021.

2. The WBC will donate the totality of the sanction fees it will receive from that bout into the WBC-CBP program and into the WBC José Sulaimán Boxers Fund.

3. The WBC will design and implement several mandatory programs at Champion Valdez’ sole cost including:

a. Taking a substantial number of random antidoping tests in the next six months as determined by the WBC-CBP;

b. Enrollment, active participation, and strict compliance with a weight management program including nutrition and hydration components designed by the WBC Nutrition Committee; Champion Valdez and his team must receive completed certification of this program.

c. Once he completes the above programs, Champion Valdez shall serve as a WBC Ambassador, whereupon he shall make a minimum of six personal appearances to promote and educate attendants on principles consistent with clean boxing, Weight management proper practices and with the WBC social responsibility values.

4. The WBC will place Champion Valdez in probation status for a period of 12 months. Any whereabouts failure or adverse analytical finding during the probationary period will result in an indefinite suspension from all WBC activity, immediate suspension of recognition of any WBC privilege (championship or status) until the matter is resolved; and being shown as Not Available in WBC World ratings.

Clean Boxing is one of the bedrocks of the WBC. The WBC will maintain its leadership in the sport by investing resources and efforts in making sure that boxing is clean and that boxers are educated and protected, while justice prevails at all times.

The WBC wishes to acknowledge and thank all those who participated in this complex process, including the Pascua Yaqui Athletic Commission and its advisors, the Association of Boxing Commissions, Top Rank, Inc., Team Valdez, and the experts and consultants who diligently worked on the case.