WBC Praises David Benavidez For Not Flagging in His Slim Quest 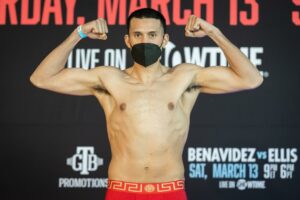 The World Boxing Council praises David Benavidez and Ronald Ellis for their professionalism in both weighing in a one hundred and sixty seven and a quarter pounds for their WBC Title Elimination fight, scheduled for Saturday night at the Mohegan Sun Arena, Uncasville Connecticut.

Undefeated David who`s still only twenty four years old (23-0, 20 KO`s)  is seeking to earn an opportunity to win the title for the third time,  while Ronald (18-1-2, 12 KO`s) who`s only lost once via a majority decision.

David lost The WBC Super Middle weight title on the scales,  although he stopped Roamer Alexis Angulo. He blamed himself,  saying that during the pandemic, he had not been able to lose weight the same way as normal or to maintain this with a few saunas.  David vowed that he would never miss the weight again,  and he has been as good as his word.

David “Red Flag” Benavidez turned pro at just sixteen, and became the youngest ever super middleweight champion in history, aged just nineteen years and nine months, by winning the vacant WBC Green and Gold belt, defeating Ronald Gavril by a MD.  He successfully defended the title by again defeating Gavril, and then stopped J`leon love. He was stripped of the title and suspended after a violation of the clean boxing program.

David unreservedly apologized for this youthful indiscretion, accepted and completed counselling and fought back to win back the title by stopping and defeating Anthony Dirrell.

David wants to earn the title challenge to fight WBC super middleweight champion and superstar Saul “Canelo” Alvarez, who`s considered the best  pound for pound fighter in the World.  David is trained by his Dad Jose and Team Benavidez, which has already helped him to become WBC champion twice!   David`s KO ratio is a staggering 86.96%!